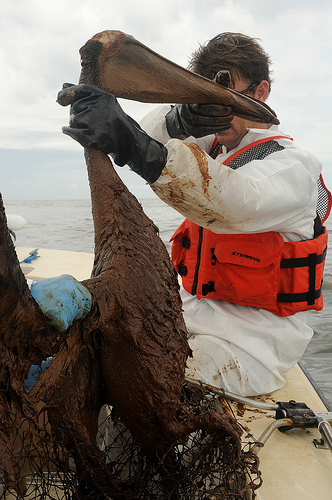 The online public relations battle is hotting up.

BP may be losing the twitter war but is doing its damndest to make sure it won’t lose the Google war.

According to ABC News, BP has purchased several phrases on search engines such as Google and Yahoo so that online users get directed to the company’s official website first.

Put simply BP is manipulating what you find on the web by buying key words such as “oil spill”. It is a strategy that online analysts say is costing BP in the region of $10,000 a day.

So if you know plug in “oil spill” into Google the first link is to BP’s website.

“Learn more about how BP is helping,” the link’s tagline reads.

In an Orwellian twist the company has admitted buying the key words to make it “easier” for the public to search for information.

Its more like it is making it harder for the public to find the truth.

ABC quotes Kevin Ryan, the CEO of California-based Motivity Marketing,  who calls it a “brilliant move. The other option BP had was to just not do this and let the news interpret what’s going on. If they’re not buying that link that goes back to their message, they’re kind of leaving the universe to kind of decide for itself. It’s actually pretty proactive for the brand.”

This kind of information manipulation does not come cheap. Scott Slatin, an analyst who runs search engine marketing company Rivington in New York, estimates BP is paying $10,000 per day to maintain the various search terms.

But what is $10,000 when you are going to pay billions in fines or spending $37 million a day on the clean up?

What BP is doing is good old-fashioned manipulation of the news. For in PR terms, the damage done to BP’s reputation from negative publicity could be more damaging than the fines and costs of the slick itself.

ABC believes that this is the first time a company facing a global PR disaster has tried to manipulate Google in this way, raising huge questions of online manipulation that will ultimately undermine BP’s and even Google’s credibility.

“The search terms, everything, it’s probably not a bad idea for the company to do,” Kevin Ryan told ABC. “Is it right? Is buying these terms ethical? That’s another question.”

BP is getting into dangerous territory here – one of the main legacies of the Exxon Valdez is the overwhelming evidence that Exxon cared more about its image than cleaning up the beaches.

It seems that BP is exactly the same. And I am not the only one who thinks so.

Leroy Stick, the person behind the BPglobalPR twitter feed, writes than one of the reasons he set up the spoof feed is that “BP seems to only care about maintaining their image so they can keep making money .. Right now, PR is all about brand protection.”