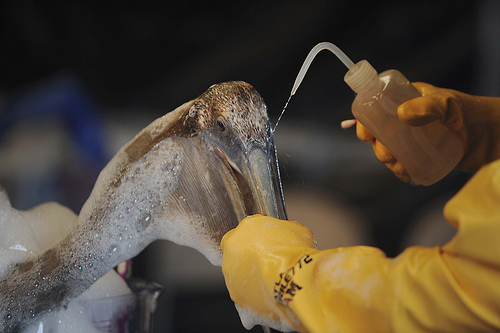 This is now becoming a comedy of tragic proportions.

Last week the EPA ordered BP to find another dispersant after repeated warnings from scientists that its dispersant Corexit was untested on the sea-bed and too toxic.

But BP is just ignoring the government and continuing to use the chemical. So far the company has poured more than 650,000 gallons of Corexit on to the spill.

The warnings over Corexit reflect growing concerns that, in a situation tragically reminiscent of the Exxon Valdez, the clean-up could be causing more harm than good.

The White House has now stepped up the pressure and directed BP to cut its use of Corexit, “significantly” or as much as much as 50%.

The head of the EPA, Lisa Jackson, said: “I am recommending as strongly as we can that we absolutely minimise the use of dispersants and that we monitor as rigorously as we can.

Jackson said she believed BP could cut its use of chemicals by half or even 75% by injecting smaller quantities underwater.

Jackson has admitted that longterm consequences of using enormous quantities of the chemical were unknown.

“It is clear to me that the science of dispersants has not in any way kept up with our ability to drill and use fossifl fuels and that is a huge disconnect,” she said.

But in a public rebuke to the EPA, the oil giant has ignored the EPA and says it will continue to use Corexit.

The trouble for the EPA is that it said it would now start testing other dispersants to see if they are less harmful than Corexit, which is a damning acknowledgement that that it has no answer either.

As the row continues, it has emerged that Nalco, the Texas-based company that makes Corexit has Rodney Chase, a former BP executive and who spent 38 years with the company, on its board.

Chase and BP CEO Hayward know each other well, having served as board directors of the company, TNK-BP together.

The dispersants are not stopping the oil being washed ashore in Louisiana and brown pelicans – the symbol of the state, have been found covered in crude.

“I never thought it would come to this,” Ryan Lambert, a charter boat operator in Buras, told a visiting federal delegation yesterday.

And nor Ryan, at this moment, does BP.

Tomorrow it will try another attempt to stop the spill: this time a “top kill” procedure.

So we have gone from “Drill Baby Drill” to “Top Kill.”