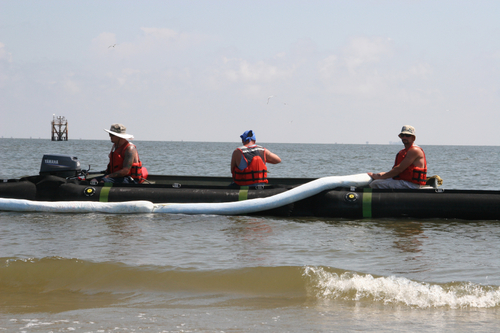 Out of sight and out of mind. That is what dispersants do to oil.

Repeatedly on this blog for the last month, we have warned about the dangers of using dispersants, especially at depths where the technique was essentially untested.

Finally we are finding out what the use of disperants has done beneath the surface.

For the last month we have had daily maps and thousands of pictures of the oil slick from the surface.

We then had warnings from a research ship of a huge vertical column of oil in the water.

We have also had the somehow peversely mesmerising live footage of the well-head billowing out.

But what we haven’t had is someone actually swimming in the stuff. Literally.

Until now. It seems amazing that it has taken a month for a journalist to actually poke his head under the water and see what this spill is doing.

So congratulations to Frank Pope, the Ocean correspondent for the Times newspaper, who dived the slick along with Susan Shaw from the marine Environmental Research Institute. Pope admits to being “suspicious of the uproar” of voices warning of the dangers of this spill.

But what he found beneath the waves has made him change his mind: “Because of depth and dispersants, this disaster is different. Its true horror lies under the surface. While the local economy will be shattered by an impact that will continue for months and years, it is what lies beyond that worries me.”

His concerns are echoed by Dr Susan Shaw who dived with him: “This is terrible, just terrible,” said Shaw, after the dive. “The situation in the water column is horrible all the way down. Combined with the dispersants, the toxic effects of the oil will be far worse for sea life. It’s death in the ocean from the top to the bottom.”

So the underwater carnage is worse because of the toxic soup of dispersants and oil.

Pope continues: ”BP’s success at keeping the oil out of sight — with the help of 715,000 gallons of toxic dispersant — means that the effects will largely go unseen and unaccounted for. There will be oiled birds, dead turtles and dolphins, but like the oil, the damage will lurk beneath the surface. There will be mysterious carcinomas and drops in fertility, but no one will be able conclusively to pin them on the accident.”

This begs a really important question that needs answering. Who proposed the use of dispersants at depth – was it BP’s legal team or operational team?

Wayback in the early days of the Exxon Valdez spill there came a time when the rock-cleaners moved way for the lawyers. It happened sooner than most people would have thought was prudent.

Twenty one years later, is BP trying to limit financial liability or limit the ecological damage for its own Valdez?

Either way it is still failing, much to the consternation of the leader writer in the Times who says:

“The reality is a grim picture of fish swimming in poison, feeding on organisms fed on poison, while poison gushes from below and is sprayed from above. The Gulf of Mexico is one of the most diverse ecosystems on the planet. This is not just a sad tale of valves and scenery. This is awful.”

“BP may not be directly to blame for this unforeseen disaster, but it is responsible for dealing with the effects. At every turn, the company has over-promised and underdelivered. It has been susceptible to its own wishful thinking, with desperately disappointing consequences for the operations in the Gulf of Mexico and for its own reputation.”

The only issue I would have with this line is that – in the fullness of time – you will find that BP is to blame for this accident, both directly and directly.

But for now it is not just the Murdoch press that is getting frustrated with BP’s response. Interior Secretary Ken Salazar said yesterday that “I am angry and I am frustrated” that BP has not been able to seal the blow out. We are 33 days into this effort, and deadline after deadline has been missed”.

This is not exactly what Tony Hayward promised is it when he said BP’s response had been great?