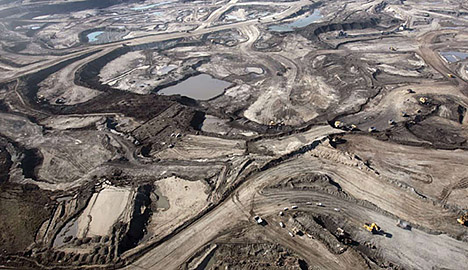 Earlier this month, I blogged how the tar sands lobby was trying to exploit BP’s Gulf of Mexico spill.

Well the pro-tar sands argument has once again been blown out of the water by a report from the social investment network, Ceres.

It argues that the environmental and financial risks of producing oil in Canada’s vast oil sands region may be even greater than the devastation currently unfolding in the Gulf of Mexico.

The Ceres report is timed to coincide with Shell’s AGM today in the Hague where demonstrators and investors will once again be demanding an end to tar sands exploitation.

Nearly 150 investors have backed a special resolution calling on Shell to give more details on the financial, environmental and human rights risks of tar sands. The action is coordinated by the responsible investment charity FairPensions, which last month targeted BP.

Shell’s shareholders should pour themselves a strong coffee and read the report. “The risks for companies involved in developing Canada’s oil sands are arguably greater than those in the Gulf of Mexico,” argues Ceres president Mindy Lubber.

* Tar sands represent a narrow and shrinking profit margin: The costs of producing oil sands – already the world’s most expensive source of new oil –  are rising and will continue to do so due to the onset of carbon pricing, higher input commodity prices, and rising costs for water treatment and land reclamation.

As a result, global oil prices will need to remain high – possibly approaching $100 per barrel – to ensure a competitive rate of return on $120 billion in planned expansion projects. If global oil prices get too high, between $120 and $150 a barrel, it will likely reduce global oil demand and shift markets in favor of alternative fuels.

* Vulnerability to changes in U.S. Markets: Presently, most of the 1.3 million barrels being produced every day flows to the United States. Long-term access to this market is highly jeopardized, however, by emerging low-carbon fuel standards in the U.S. that will require a lower carbon intensity in transportation fuels.

These fuel standards, already adopted in California, will put carbon-intensive oil sands fuel at a distinct disadvantage because oil sands output will likely have to be mixed with next-generation biofuels that are not yet being produced on a commercial scale.

* Other Distribution Obstacles: Transporting expanded oil sands production west to China and other Asian markets is another alternative. However, there is strong opposition to building pipelines to Canada’s West Coast from Aboriginal communities who have significant rights under the Canadian constitution.

* Water and Other Resource Constraints: Oil sands production is highly water intensive, with up to four barrels of freshwater consumed for every barrel of oil produced from surface mining extraction. Water withdrawals from the Athabasca River watershed are already restricted during winter months to protect fish habitat.

Alberta’s Directive 74 requires oil sands miners to speed up remediation of existing ponds – an order that creates especially large liabilities for the industry’s legacy miners such as Suncor and Syncrude.

“We recognize that oil companies will continue to invest in the oil sands,” argues Lubber, “but they shouldn’t do so blindly. Investors need assurances that the risks outlined in this report are being taken into account.  This includes the fact that carbon will be regulated, that water will be increasingly scarce, that tailings ponds need to be cleaned up, and that doing all this will be expensive.”

“The oil sands process takes natural gas—the cleanest-burning and lowest-carbon fossil fuel—to turn one of the dirtiest and highest-carbon fuels into a saleable product” adds Doug Cogan, one of the report’s co-authors and director of climate risk management for RiskMetrics Group.

He continues: “Large volumes of freshwater are also consumed in the process, and end up in toxic tailings ponds.  It’s like the Gulf of Mexico spill, but playing out in slow motion.  From a climate and ecological perspective, we’re really no better off.”

In short the tar sands are a slow motion climatic car crash.