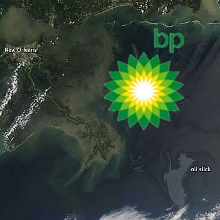 It’s now been over three weeks since BP’s oil rig Deepwater Horizon exploded, burned and sank in the Gulf of Mexico.

These have been hectic weeks for all concerned, no doubt, but the paucity of information available to the public is at best, discouraging.

How much oil is flowing / has flowed into the Gulf of Mexico?

Recent news reports stress that no one knows how much oil is flowing, but everyone seems to accept the 5,000 barrels per day figure. We know from past experience that oil companies tend to minimize the amount of oil spilled and unlike a tanker spill, there is no finite amount of oil that can be spilled in the worst case scenario.

Why are we just now seeing images of the leak?

Remotely operated vehicles (ROVs) have been working at the site of the spill since the first days after the rig sank. They transmit photos and video to their operators at the surface. Of course, the ROV operators have their hands full, but surely these images must have been passed along to the Coast Guard and other federal agencies that are – we’re told – in charge at the scene. Surely we understand why BP might be slow to release these images, but one would hope the federal government would have more respect for the public’s right to know what’s happening in a publicly owned resource.

Why is the federal government continuing to exempt offshore oil rigs from environmental standards?

Thanks to the Center for Biological Diversity (CBD), we learned late last week that the Minerals Management Service has granted categorical exclusions to 27 offshore rigs since the Deepwater Horizon exploded. “Categorical exclusions” mean that the projects do not have to pass the environmental review required by the National Environmental Policy Act.

Categorical exclusions were built into the law for project that clearly have limited environmental impact, like hiking trails, not oil rigs capable of wiping out entire ecosystems. And by the way, what would have happened had CBD not blown the whistle?
Speaking of other rigs, what’s up with the other 3,000-plus rigs in the gulf?

At Wednesday’s hearing in the House Energy Committee’s subcommittee on oversight, Rep. Bart Stupak (D-MI) revealed the “fail-safe” blowout preventer had 1) a dead battery in its control pod 2) a leak in its hydraulic line 3) a “useless” test version of a key component and 4) a cutting shear that wasn’t strong enough. We have no reason to think other oil companies are more devoted to environmental protection than BP, so why should we not expect this to happen again and again and again? How do we know it won’t?

Why should we think the federal government is providing adequate oversight?

Why did BP not have emergency plans ready in advance? BP has already tried – and failed – to put a containment dome on the biggest leak. We all sat around for days while BP fabricated the dome on shore. If such domes – in effective as it proved to be – are the best response for such leaks, why are they not pre-made and standing by on every rig? Now we sit and wait as BP fabricates a “top hat” plug.

(Memo to BP: why don’t you start work on Plans D and E now instead of waiting for your latest contraption to fail?) Perhaps Plan D is the famous “junk shot,” in which BP will attempt to inject shredded tires, golf balls and knotted rope into the well. That’s 21st century technology? The best you can do? Golf balls and shredded tires? This is why we cannot afford to drill in the ocean. This is why we especially cannot allow incompetents to drill in the ocean.

What’s going on with the environment?

We’ve seen press releases from the National Oceanic and Atmospheric Administration (NOAA) about taking samples in the gulf, but we haven’t seen what the results are. True, science does not move at the pace of the 24-hour news cycle, but NOAA should have something to tell us.

What concentrations of oil are they finding at various depths? How far from the wellhead are they finding oil? (It would help establish an estimate of how much oil has leaked so far.) What about EPA? The oil spilled is light crude, which contains low-molecular weight volatile organic compounds (VOCs). In acute exposure, VOCs lead to headaches, nausea, vomiting and upper respiratory inflammation. Like NOAA, EPA is testing for VOCs, but where are the results? After 9-11, EPA infamously told people the air in lower Manhattan was safe to breathe. It wasn’t. Now they’re not telling us anything. I suppose it’s an improvement, but not much.

When will gulf residents begin to see restitution?

This spill happened at the worst time of year. Everything that swims, flies or crawls in the Gulf of Mexico is laying eggs and raising their young right now, if they can. Many of the commercial and sport fishing seasons were about to kick into high gear when the fishing grounds were closed. People are out money right now.

They need help paying their May bills. And don’t tell me fishermen can get work from BP towing booms back and forth across the gulf. That’s like being invited to attend the funeral of your livelihood, your father’s livelihood and what you had hoped would have been your children’s livelihood.

In the Exxon Valdez spill, Exxon kept the damages case tied up in court for 20 years (and got the verdict reduced to ten cents on the dollar). Twenty percent of the Valdez plaintiffs died before they received compensation. Will BP’s executives be as heartless as ExxonMobil’s? Will the Department of Justice stand by and watch as gross injustice is done? Does the federal government respond to citizens or corporations that make campaign contributions?

Why is the Department of Justice not investigating all the legally specious forms BP and Transocean are pressuring people to sign?
The media has reported that Transocean, which owns the now-sunken Deepwater Horizon, tried to force the survivors to sign waivers promising not to sue Transocean for damages before they were allowed to leave the hotel they were brought to after their rescue. Alabama Attorney General Troy King had to step in and stop BP from distributing waivers to Alabama coastal residents, in which they would promise not to sue BP for damages in return for a small sum of cash.

BP tried to get fishermen to sign gag orders, preventing them from speaking to the media, if they wanted work helping with the cleanup. I’m told most of these documents won’t stand up in court, but its not just about court, it’s the intimidation factor of predatory corporate attorneys going after victims in their hour of maximum anxiety.