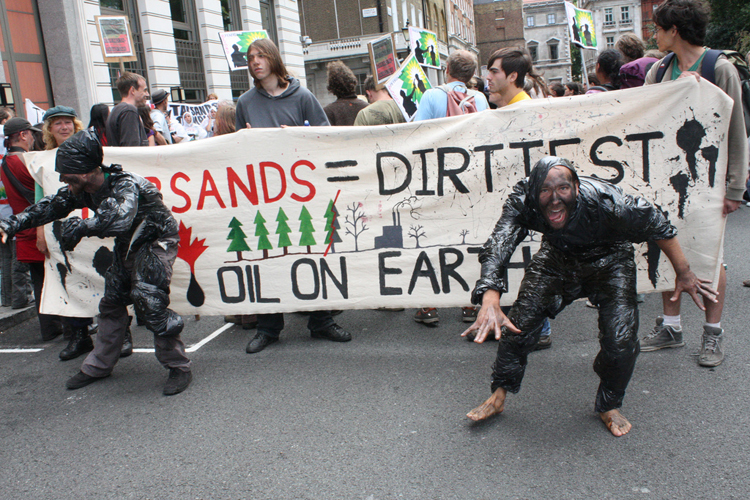 Disaster One. New estimates put the amount of oil per day pouring into the Gulf of Mexico at one million gallons a day.

If this is so, BP’s disaster may have spilt more oil than the Exxon Valdez, when at least eleven million gallons poured from the stricken tanker.

Disaster Two. There is another ecological disaster on the US Gulf Coast. And this one is unseen and unnoticed. Until now. And once again BP is a guilty party.

You may have thought that the dirty tar sands was only a North American problem. But it is not.

In the US Gulf Coast, the dirty Canadian tar sands are refined into petroleum products and then shipped to the thirsty markets of Europe.

So the bad news for European consumers is that you may have thought you were not putting tar sands in your tank. But you could well be.

According to a new report by Greenpeace – Tar Sands in Your Tank Exposing Europe’s Role in Canada’s Dirty Oil Trade – “tar sands crude oil have been regularly entering the EU’s petroleum supply chain for some time, primarily through imports of diesel from the US Gulf Coast (USGC).”

For anyone not versed in the peculiarities of the petroleum market, it might seem strange that Europe – that refines vast amounts of petroleum products itself – is importing refining products from the US. But that is because there are more diesel cars in Europe.

So there is greater demand for diesel refined products in Europe than in the US.

The environmental pressure group argues that “A significant rise in the trade in diesel fuel between the USGC and the EU since 2008 is likely to continue to provide crucial support for the struggling refinery industry in the region. The trade is supported by a structural diesel deficit in the EU market and a similar surplus in the US.”

Greenpeace has found that that there are at least three refineries which both source from the Alberta tar sands and export products to Europe. These are:

So, whilst Greenpeace acknowledges that the level of contamination with tar sands crude in the diesel reaching Europe from the Gulf Coast refineries is currently low, it says it is set to grow significantly.

But the industry wants expansion through the “Keystone XL” pipeline, which extends and adds additional capacity to the existing pipeline network.

The proposal has considerable industry support. Regulatory approval has already been granted in Canada, and the process is underway in the US.

So the problem for European motorists is that when the fill their car up, they could be expanding the tar sands. This places both European consumers and more importantly the regulators in a unique position to stem the growth in tar sands production.

The EU does have legislation in development that should restrict imports of high carbon intensity petroleum products such as the tar sands, in the form of the Fuel Quality Directive, but Greenpeace argues “this needs significant strengthening – and rigorous implementation – to do the job. “

The group argues that “If European regulators fail to get this right, European consumers will be increasingly putting tar sands fuel in their tanks and playing a major role in driving the destructive growth of tar sands production.”

So European drivers – next time you fill up – ask where your fuel comes from..