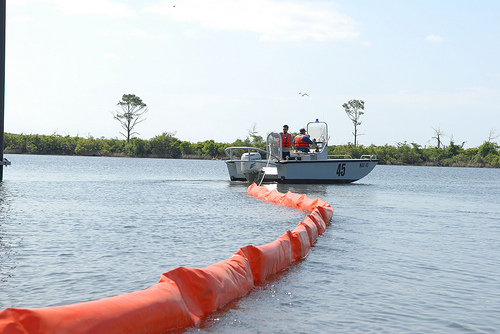 Just days ago, BP’s CEO Tony Hayward said that the company would keep the oil from the beaches.

It is yet another broken promise from the oil giant. Oil has now reached shore in Louisiana on the Chandeleur Islands, an important breeding and nesting area for birds.

So far oiled birds such as gannets and brown pelicans have been found.

The news comes as criticism of BP’s use of dispersants grows. Also days ago Hayward said that a key strategy for BP was spraying dispersant underwater to help break up the oil.

But now the US regulator has admitted that the ecological consequences of this are “unknown”.

The EPA has said that “the effects of underwater dispersant use on the environment are still widely unknown, which is why we are testing to determine its effectiveness first and foremost.”

Larry Schweiger, the head of the US National Wildlife Federation head, has also said the method of using underwater dispersant at the source of the leak was untested and could have devastating effects.

“The problem with putting the underwater dispersant where they’re putting them is that they’ve never done that before”.

“The increasing use of dispersant has left a number of questions about where this material is moving to,” said Mr Schweiger.

What will be unknown is the effect this coctail of dispersant and oil will have on marine life with vast amounts of both now present in the water column in small concentrations, rather than on the surface.

So the problem may not look so bad from the air but underwater there is a ticking timebomb for small marine life.

Dispersant only makes oil disperse by breaking it down the oil into smaller quantities.  It does not make it go away. These dispersants “do not actually reduce the total amount of oil entering the environment,” concluded a 2005 National Academy of Sciences report.

These small droplets of oil and dispersant are toxic to microorganisms as well as the spawning fisheries, which are later this year in Lousiana due to the bad winter. Both the dispersant and oil could seriously affect shrimp lava too.

But with the oil washing up onshore BP faces an even greater dilemma. Many experts still say that despite their risks, dispersants are a “necessary evil” to break up oil, but only if it is done far from the shore.

Spraying dispersant close to shore comes with far greater ecological and human risks. Will BP make the mistakes that Exxon did and spray close to shore?