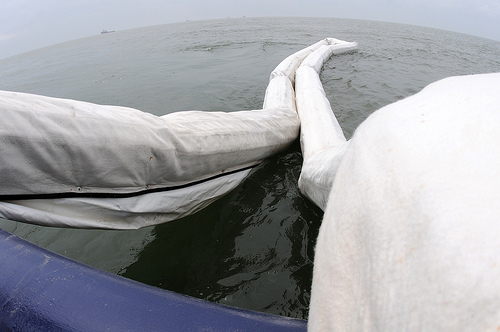 In the middle of potentially America’s worst environmental disaster, BP is attempting to squarely shift the blame for the Deepwater Horizon disaster from itself to Transocean.

As BP’s CEO Tony Hayward prepares to meet key Congressmen in Washington today, you can see part of BP‘s PR strategy in play with the simple message: We are not to blame, although we will clean up the mess.

But this was not the only crucial equipment that was missing:

BP is also in denial about the success of BP’s response to the spill. “We have contained the oil in the offshore”, said Hayward, calling the response plan “a success”.

He went on to add that “There is today no oil on the shore, there is no oil forecast to be on the shore.”

This is in complete contrast to news stories that have oil already washed up on the shore and maps plotting the course of the main spill expecting it to hit land today.

And even if the wind changes and much of the oil stays at sea, this is hardly good news.  Jacqueline Savitz, a senior scientist at Oceana, a nonprofit environmental group, argues “Some people are saying, it hasn’t gotten to shore yet so it’s all good.”

She continues: “But a lot of animals live in the ocean, and a spill like this becomes bad for marine life as soon as it hits the water. You have endangered sea turtles, the larvae of bluefin tuna, shrimp and crabs and oysters, grouper. A lot of these are already being affected and have been for 10 days. We’re waiting to see how bad it is at the shore, but we may never fully understand the full impacts on ocean life.”

So when Congressmen grill Hayward later today, they should grill him over BP’s record of trying to oppose enhanced safety features on the rigs.

They should grill him about putting profit over safety and the environment.

Brent Coon, a lawyer who sued BP over a previous deadly oil facility explosion, is now representing a 24-year-old roustabout who was working on the rig at the time of the blast.

“BP stands apart, heads and shoulders above all the rest of them, with respect to their conduct,” argues Coon. “It’s like they just don’t care.”

So Mr. Hayward it is your accident.

And no matter what you think, the public rightly believes you are to blame.