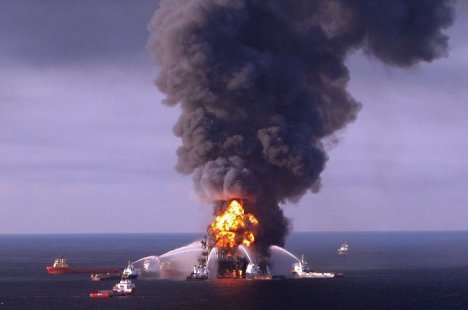 Less than a month ago, Barack Obama told us he wants to open 167 million acres of America’s continental shelf to oil drilling.

At the time, he promised the nation that we have the technology to do this in a safe, clean and environmentally sound manner.

Now the president can go to another mass funeral (or memorial service if the bodies are never found) without ever admitting that oil – like coal, like nukes – is not the answer to our problem, they ARE our problem.

Mr. Obama’s not stupid, although he’s a fool. He’s foolish to make sweeping announcements about policy while giving citizens assurances neither he nor anyone else can back up. Where would he have gotten the notion that we can safely drill for oil on the continental shelves?

From the oil companies. Just as the Wall Street banks and bank-like non-banks tell him they can regulate themselves with no harm to the economy.

But, as Mr. Thurber said, you could look it up. The current oil catastrophe is the work of BP, which once stood for “British Petroleum.”

A few years back its CEO, John Browne, changed the name to BP (one of those initial-only names, like UPS or KFC) and adopted the slogan “Beyond Petroleum.” The idea was that BP was going to be a 21st century energy company, bridging from dirty to clean, old to new, etc., etc.

Didn’t last long. The board dumped Mr. Browne and went back to being an old-fashioned oil company. They only vestige of the “Beyond Petroleum” era is the cloying green-and-yellow sunflowerish logo.

In 2005, 15 workers were killed in an explosion at a BP refinery in Texas City, Texas.

BP was found to have scrimped on safety spending which would have protected workers. The fourth-largest corporation in the world puts bottom line profits and obscene executive pay above the lives of workers. Sound familiar, Don Blankenship?

And yet, when Mr. Obama trots out before the public to promise offshore drilling will be clean and technically state-of-the-art, these are the people he relies on for data.

In 2006, BP spilled 200,000 gallons of crude oil into the fragile environment of Alaska’s North Slope. Why?

BP failed to run proper maintenance on decades-old pipelines. Another such spill occurred in November 2009 (46,000 gallons) and a third a few weeks later. This time the environment and taking care of its own equipment were rated lower than profits and bonuses on the list of BP priorities.

These idiots couldn’t properly handle the grease in a deep fryer and yet they are the same people the President of the United States of America relies on to undergird his energy policy. No wonder he’s picking his political teeth off the floor.

Many of my still-supporting-Obama friends point to some of the many good things the president has done, such as strengthening the EPA’s hand on a host of issues related to toxic chemicals.

He has and I’m glad he has, but a) he’s following an administration that was an environmental disaster and b) time is running… no, has run out on global warming and the denizens of the west wing think there’s still time to play politics. I’m still glad I voted for the guy and I wouldn’t want John McCain and Sarah Palin running things, but events are unfolding not as I hoped and more important, not as the country or the planet needs.

It’s about priorities. If you run a multinational oil company, your priorities should be the lives and safety of your employees, the health of the environment in which your corporation conducts business. These come – or should come – ahead of your salary, bonus and perks. I know this is a surprise.

If you are the POTUS, your priority should be the survival of our civilization, since that is the consensus opinion of the scientific community. That means stop coddling the oil and coal industries. Stop spreading notions you know to be lies, like “clean coal” and “safe offshore drilling.”

To be clear: the whole explosion, dead workers, massive oil spill thing is bad, but it won’t bring about the above-noted end of civilization.

Priority one is to stop burning fossil fuel.