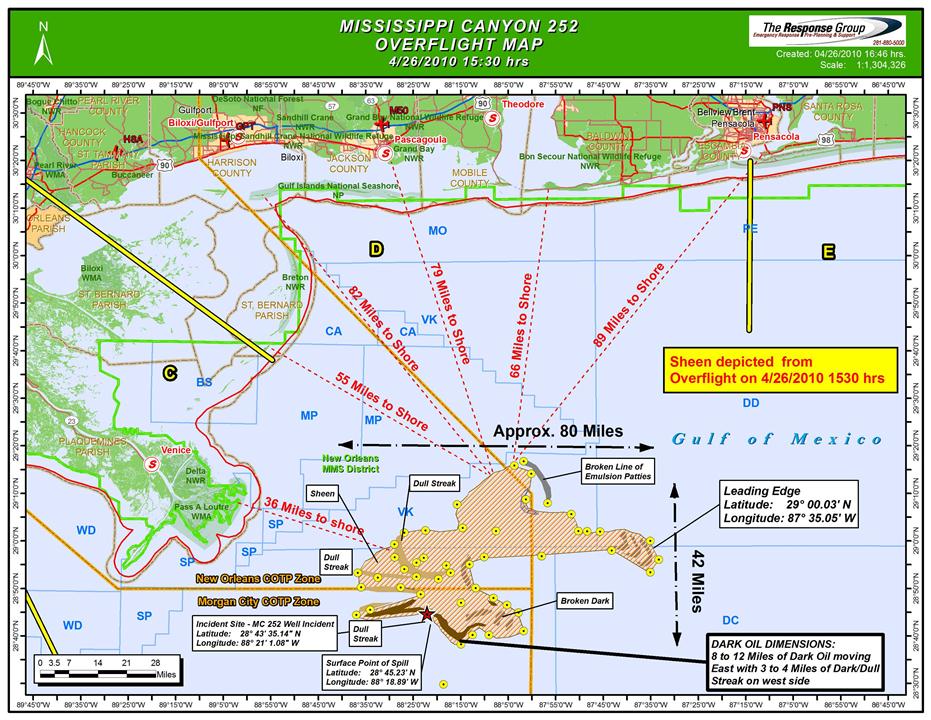 The latest estimates from BP’s oil spill in the Gulf of Mexico are that the amount of oil escaping from the sunken rig is much worse than previously thought.

Yesterday the estimates were 1,000 barrels a day.

Today that has been revised to 5,000 after a new leak was discovered.

The discovery of the new leak means that the slick could reach the size of the Exxon Valdez oil spill within 50 days, with many analysts saying it could be twice that before the leak is plugged.

The slick is now edging closer to the fragile Louisiana wetlands,  part of the US Gulf Coast which houses 40 percent of the nation’s wetlands and a multi-billion-dollar fishing industry.

As the AFP now reports, officials are preparing for “an environmental disaster which threatens a slow and painful death for waterfowl, wildlife and their wetland habitat.”

The situation is no so desperate that yesterday officials worked to ignite a controlled burn to remove oil from the water.

It is the first time a controlled burn of this kind has been attempted off the US shoreline.

Lets get one thing straight: burning oil is no environmental panacea – It may be better than thousands of barrels washing up over the shore, but it does come with risks.

As ITOPF  – the International Tankers Operators Pollution Federation – “In reality, there are a number of problems which limit the viability of this response technique. These include: the ignition of the oil; maintaining combustion of the slick; the generation of large quantities of smoke; the formation and possible sinking of extremely viscous and dense residues; and safety concerns.”

The last time they tried it in British waters with the Torrey Canyon in 1967 they used napalm, fresh from the fields of Vietnam.

Some forty years later, the oil industry’s spill response has hardly got any more sophisticated.

So lighting oil on water can be technically difficult, especially if the sheen of oil on the water is thin as is the case here. Burning will only remove part of the oil and will create serious air pollution. Burnt oil also becomes heavier and can sink.

This is also a problem, as ITOPF admits: “The viscous residue that can be left following in-situ burning resembles the consistency of toffee, and is difficult to recover both at sea and from the shoreline. Of even greater concern is the potential for some residues to sink. Sunken residue has the potential to smother or poison bottom dwelling (benthic) species”.

ITOPF concludes: “When oil does sink to the sea bed and cause problems, the scope for recovering it is limited.”

So BP is now resorting to a plan, knowing that recovery of any residual oil will be “limited”.

Welcome to the 21st Century oil industry that supposedly can be trusted to drill close to shore.

What seems amazing is that no one seems to have had a contingency plan in place for this kind of disaster in the Gulf.

It also torpedoes Obama’s recent announcement to expand offshore drilling across vast swathes of the US coast.

The industry had always maintained it could contain the risks.

But the spill has exposed that promise to be a lie. “This is the accident that clearly proves that coastal oil industry is dirty, it’s dangerous and it’s deadly,” said Aaron Viles, campaign director for the Gulf Restoration Network environmental group.