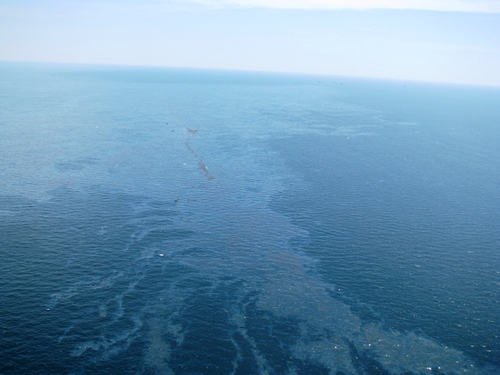 In BP’s magazine last year a senior company executive bragged that the company was focussed on “operational excellence” and “silent running”.

“Silent Running” was a new concept within the global oil giant.  The final years of Lord Browne’s reign were plagued by the Texas fire in 2005 when 15 people died and by a notorious pollution episode in Alaska in 2006.

It was loud humiliation.

Under new fresh faced CEO Tony Haywood, BP was asking for its operating companies to keep their heads down and run silently without causing any problems or embarrassments: hence silent running.

Last week its Deepwater Horizon rig exploded and sunk in the Gulf of Mexico. Eleven workers are missing presumed dead.

An estimated 42,000 gallons a day are now spewing into the Gulf of Mexico from its rig. Currently the spill is 48 miles at its widest, 39 miles at its longest and has a circumference of 600 miles. It is no understatement that it could be an environmental catastrophe, with the slick within 20 miles of the ecologically fragile Louisiana coastline.

The state is just one month away from opening its inshore shrimping season, its crab season is just starting and oyster beds could be closed if the oil gets into coastal estuaries. Bird nesting areas on the fragile barrier islands are also at risk.

If not plugged soon, the disaster will develop into one of the worst spills in US history.

Asked to compare the accident to the notorious 1989 Exxon Valdez, Rear Admiral Mary Landry, who is leading the response, said: “If we don’t secure the well, yes, this will be one of the most significant oil spills in US history.”

And there is no certainty that BP will be able to stop the leak any time soon. BP is now planning to cover the spill with an umbrella-like canopy, but this could take weeks. If this fails it might drill a relief well, but that could take months.

And so with the disaster comes the dirt.  The incident is not an isolated incident. The US Minerals Management Service reports 509 fires caused at least 2 fatalities and 12 serious injuries on rigs in the Gulf of Mexico since 2006.

With what will come as no surprise to seasoned campaigners, documents have emerged that show BP argued against new, stricter safety rules proposed last year by the U.S Minerals Management Service that oversees offshore drilling.

BP was one of several companies that wrote to the U.S. Minerals Management Service saying additional regulation of the oil industry was unnecessary. In a letter, BP said the current voluntary system of safety procedures was adequate.

Many of the accidents had been caused by factors such as communications failures, a lack of written procedures and the failure of supervisors to enforce existing rules, and proposed mandatory requirements to reduce the number of incidents.

And now it has emerged that BP is being investigated by US authorities over claims from a whistleblower that it broke the law by not keeping key documents relating to another platform, called the Atlantis.

Only time will tell how bad the ecological damage from the disaster will be.

But one thing is certain: Silent Running it ain’t.