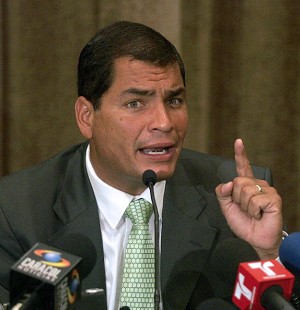 It is the latest twist in the on-going soap opera of Ecuadorian oil.

You have the Indigenous Indians fighting in the courts in a multi-billion battle against Texaco’s lethal toxic legacy – a battle that has been going on for decades.

But now the tiny Latin American country is threatening to follow its powerful neighbour, Venezuela, and expropriate the holdings of foreign oil companies unless they agree to hand over more oil revenue to the cash-strapped government.

Like many countries around the world, Ecuador has woken up to the fact that they have been losing out big time to the foreign multinationals.

President Rafael Correa said every day millions of dollars were going to oil companies that should go to the state.

The government has been pressing the companies to give up concessions that give them a share of oil field profits and accept service contracts instead.

“My patience with this is up,” Mr. Correa said during a weekly radio address. “The oil companies are playing around with us. In the coming weeks there are going to be very considerable actions. I have no regard for these companies, which have abused our country.”

Correa then threatened to push legislation to the country’s congress to facilitate the expropriation if the companies refuse to sign the new service-based contracts.

Some say the new rules could be rushed through in sixty days, others doubt it could be that quick.

Although the plans were announced nearly three years ago, it was only last year that draft contracts were sent to the companies.

However so far the companies – China’s Andes Petroleum and Petroriental, Brazil’s state-run Petroleo Brasileiro, Eni SpA of Italy and Repsol of Spain – have refused to play ball. A showdown is inevitable.

Some believe that a full nationalisation is not probable though. “A nationalization of private oil assets in Ecuador is probably not imminent,” said Gary Kleiman, of Washington-based emerging markets consultancy Kleiman International. “I think there is room to negotiate.”

But after three years, you would understand why the Ecuadorian patience is wearing a bit thin.

Private oil companies in Ecuador are responsible for 42% of the country’s production of about 466,000 barrels per day.