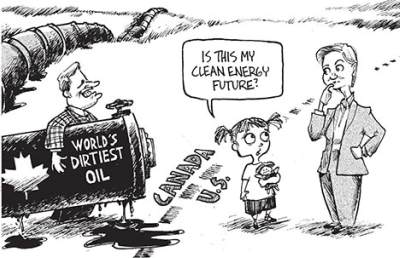 In their new report, the Co-op and WWF say the combined cost of all tar sands – $379 billion between now and 2025 – could be used for clean power projects such as the Desertec scheme linking solar plants in North Africa to a “supergrid” which could produce 15% of Europe’s electricity by 2050.

The money could also help half of the Millennium Development Goals in the 50 least developed countries, including averting four million child deaths annually and providing universal primary education.

These targets include averting the deaths of 4 million children, 300,000 mothers, and almost half a million victims of HIV and TB.

The report highlights Shell and BP’s involvement in tar sands investments. BP is set to invest $10 billion in its Sunrise tar sands project and also plans to spend another $2.5 billion converting a refinery in Toledo, Ohio, to process the synthetic crude oil produced from the tar sands. Meanwhile Shell is spending $14 billion to expand the Athabasca Oil Sands Project  to raise its capacity to 255,000 barrels per day.

“The sums of money being invested in tar sands developments are enormous and difficult for the average person to grasp,” says Paul Monaghan, head of social goals at the Co-op.

He added that the report, called The Opportunity of the Tar Sands, “puts things into perspective and demonstrates not only the scale of the problem, which could take us to the brink of runaway climate change, but also the opportunity being lost. It is literally a matter of life and death that these enormous oil titans are re-steered to much more sustainable paths.”

The report is being released to coincide with the UK premiere of Dirty Oil, a hard-hitting documentary film that outlines the impact tar sands extraction is having on the environment and the health of first nation Indians. It is being distributed in 25 cinemas across the UK.

To see the trailer for Dirty Oil click here.