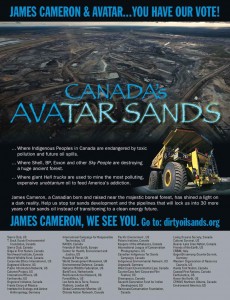 For all you romantic film-buffs out there, this week-end’s Oscars is a fight between an ex-husband and wife partnership: James Cameron’s Avatar and Kathryn Bigelow’s The Hurt locker.

Those rooting for Avatar include a collation of 50 Indigenous and environmental groups who yesterday ran a great advert in the celebrity magazine Variety.

Called ‘Canada’s Avatar Sands,’ the ad draws the parallels between the film and what is happening in Alberta.

The Navi people stand in for the aboriginal communities living near the Athabaska Oil Sands in Alberta, and the Sky people represent the oil companies with mining operations there.

“Where Indigenous Peoples in Canada are endangered by toxic pollution and future oil spills,” reads the $20,000 advertisement.

“Where Shell, BP, Exxon, and other Sky People are destroying a huge ancient forest. Where giant Hell trucks are used to mine the most polluting, expensive unobtanium oil to feed America’s addiction.”

Michael Marx, head of U.S-based Corporate Ethics International, one of the groups that bought the ad argues: “There are people living the Avatar storyline around the world, and we’re grateful for the opportunity to bring attention to that.”

He added: “The tar sands of Canada and the infrastructure that is being built to import that oil into the United States is slowing down our transition to a clean-energy economy. It’s keeping us addicted to oil.”

Canadian Director James Cameron has also been outspoken about the movie’s message. “Avatar asks us all to be warriors for the Earth,” he said recently. “This beautiful, fragile, miracle of a planet that we have right here is our land. Not ours to own, but ours to defend and protect.”

The ad has got the oil industry fuming and its trying to greenwash its operations, just as the Royal Bank of Canada did yesterday.

The Canadian Association of Petroleum Producers  wants you to think of the oil sands as “responsible oil.”

“Canadian oil is responsible oil,” said Janet Annesley, Vice President of Communications for the Canadian Association of Petroleum Producers. “Unfortunately this blurring of the lines between fact and fiction by anti-oil activists has become all too common.

“We invite these activists back to planet Earth to discuss the appropriate balance between environmental protection, economic growth and a safe and reliable supply of energy.”