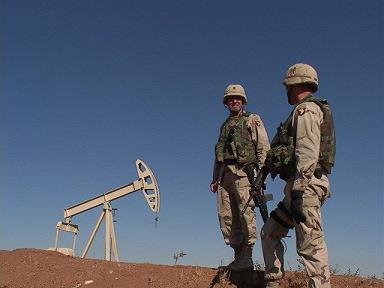 So seven years later it will come down to this weekend.  Whether President Obama can withdraw all American combat troops from Iraq by August will be decided by the Iraqi elections this weekend.

If the election passes off peacefully, American soldiers will probably go home on schedule. But if there is a repeat of the sectarian bloodletting, Obama will be forced to rethink his timetable.

The other wildcard in the election is oil.

The AP continued how for Maliki, the recently signed oil deals “are a vital part of his bid to win a second term in March 7 elections. Al-Maliki has billed himself to voters as the leader that can ensure the development of Iraq’s dilapidated oil sector and bring in billions of dollars to rebuild the country’s struggling economy.”

Al-Maliki’s promises could take years to fulfill and many experts see his predictions for increasing oil output as wildly optimistic. But what matters for the premier is persuading voters to keep him in his post to shepherd the process.

Al-Maliki’s government has made the hugely optimistic promise to raise output to more than 12 million barrels a day within six to seven years. But given the dilapidated state of the oil industry and continuing tense security situation, this seems wildly optimistic.

The powerplay over who will control Iraq’s oil resources, will be played out particularly fiercely in and around Basra — home to 70 percent of Iraq’s daily oil output and its only Persian Gulf outlet.

Five of the fields recently awarded in the auctions are located near the city as is the great prize of the Rumaila field, with an estimated 17.8 billion-barrel reserve, that will now be exploited by a consortium led by BP.

But in Basra, Al-Maliki faces political rivals who are opposed to the oil deals with the foreign multinationals. The Sadrist party, loyal to radical cleric Muqtada al-Sadr, Fadhila Party and nationalist Iraqis, have all accused him of surrendering the nation’s oil wealth to international companies.

And this goes back to the country’s proposed international oil law, which has been in a state of political limbo since 2007.

If Al-Maliki loses the election, his political opponents might come in and say that – in the  absence of an oil law – the recent oil deals between the Iraqis and the international oil companies are unlawful and should therefore could be overturned.

And that would cause political chaos in Iraq and turmoil in Washington and London.

It would aso mean that the American troops would probably stay as well.