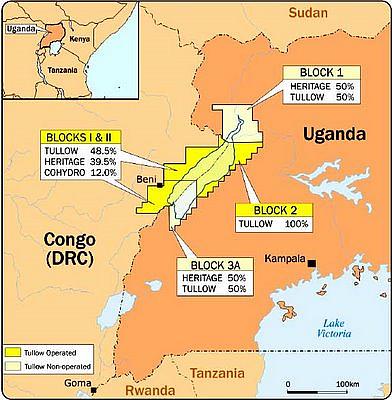 The London-based environmental group Platform was the first group to analyse the oil contracts in Iraq called Production Sharing Agreements (PSAs), which gave lucrative terms to the international oil companies.

Now they have turned their attention to the rapidly expanding oil scene in Central Africa in Uganda.

Uganda is said to be sitting on the largest onshore oil reserves in sub-Saharan Africa.But once again the story of oil in Africa looks set to be one where petrodollar corruption and environmental degradation are an integral part of the story.

The flares that have blighted the Niger Delta for fifty years look set to be lit along the shores of Lake Albert in Uganda.

Uganda’s long-serving president Yoweri Museveni has said the oil exploitation in his country will not follow the disastrous Nigerian model, but will try and replicate what has happened in Norway.

Platform has managed to get access to confidential documents that are published in the report. According to one of the report’s authors Taimour Lay in Kampala, these documents “make clear that the corporations and the government cannot be trusted to protect the Ugandan people from the negative impacts of oil extraction. It is up to social movements and civil society to create the pressure to defend rights, livelihoods and Uganda’s rich environment.”

The report has also examined the legal clauses in relation to current oil company practice in Uganda and in comparison to terms in other countries.

Their analysis of the PSAs raises serious questions about:
* How the structure of the deals guarantees huge profits for the companies while placing risks and responsibilities on the Ugandan government;
* The lack of transparency over bonus payments to the Ugandan government;
* The complete absence of penalties for environmental damage caused by the companies;
* The legal rights granted to the companies to flare natural gas;
* The ‘stabilisation clause’, whose breadth has been confirmed by access to a confidential Ernst&Young audit report, which will restrict Uganda’s ability to improve its environmental protection and human rights standards in the future.

The report recommends that:

”Urgent changes should be made to the contracts, legislation and regulatory regime covering oil, to achieve some level of environmental  protection, to ensure accountability for military forces enforcing security, to protect a degree of Ugandan sovereignty, to minimize economic distortion through revenue flows, to capture a more appropriate share of the revenues and to re-apportion the economic risks.”

The oil company leading the oil exploitation Tullow Oil has repeatedly stated that they are committed to ensuring they operate according to ”good international and industry practice”.

But Platform argue these promises are “meaningless when there is no such agreed standards and no contractual enforcement mechanisms for the host country.”

Tullow and their partner Heritage Oil control the majority of the Ugandan fields but are thought to be close selling their holdings to US giant Exxon.