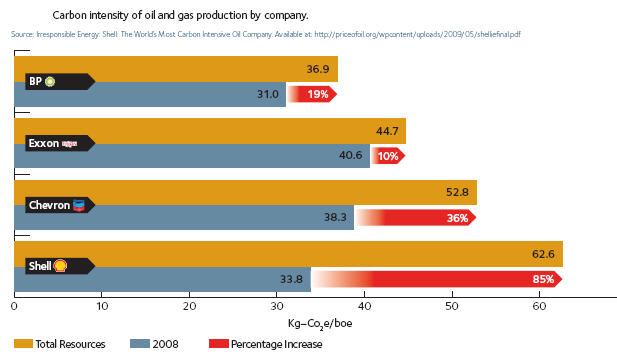 Just over a decade ago it made a big song and dance about moving into renewables, only to beat a humiliating retreat a decade later.

For the last five years, Shell has been increasing investing in heavy – or unconventional- oils, arguing that the dirty tar sands will be the only way to meet rising energy demand.

Now the oil giant has signalled another change in strategy, although more a shift in direction rather than a complete U-turn.

Now I would like to think that behind the scenes at Shell’s HQ it has been feeling the heat from environmental groups, indigenous rights organisations and investors to disinvest for the dirty tar sands.  That may be the case.

I would also like to think that Shell read the report published by Oil Change and others last year that showed it would become the world’s most carbon intensive oil company, just at the time when we need to be decarbonising our economies.

For the short report go here. For the longer report here.

This increase is shown nicely in the graphic that shows that Shell’s carbon intensity will increase by 85 per cent.

But if Shell is privately worried about rising carbon intensity, it will never concede that, arguing more that it is cool economics that have forced its hand rather than concerns about climate change. Soaring costs in the region are said to be an important part of the decision.

According to the FT this morning: “The shift back to conventional oil and gas represents a break from the strategy of Jeroen van der Veer, Shell’s previous chief, who planned a steep rise in the share of the company’s production coming from unconventional resources. It represents a vote of confidence in Shell’s ability to find new oil and gas fields, which has in the past been one of the group’s weaknesses.”

Despite the shift in strategy, Shell is still raising its tar sands production with the $14bn expansion of its 60 per cent owned Athabasca Oil Sands Project to a capacity of 255,000 barrels per day, due to be completed next year.   But plans for a rise to 700,000 b/d have now been scaled back.

So the climate can breathe a little easier this morning, although new CEO Peter Voser is not signalling a return to renewables.