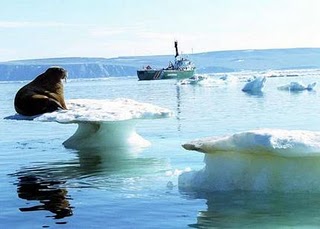 The Chukchi Sea stand-off between environmental and Alaska Native groups and Shell has taken another twist, with a new legal action to stop the oil company’s plans to drill in the region next summer.

Yesterday’s challenge was filed in the Ninth Circuit Court of Appeals a group of Native Americans and environmental organisations including the Natural Resources Defense Council, Sierra Club, and The Wilderness Society.

The organizations are being represented by Earthjustice, a nonprofit environmental law firm.

The lawsuit is against the US Department of Interior’s Minerals Management Service (MMS) which has approved a Shell drilling plan for up to three exploratory wells in the Chukchi.

The groups say the plan approved by the MMS does not comply with federal environmental laws.

They also contend that the MMS gave approval after doing only an abbreviated and internal review of its potential harms and despite significant concerns surrounding Shell’s oil leases.

And they say the plan was approved without evaluating the potential impact of a major oil spill in the Chukchi Sea.

The groups also argue that the drilling will cause a massive environmental impact, even without a spill.

Under Shell’s plan, a huge 514-foot-long drill ship and an armada of support vessels and aircraft would patrol the Arctic Ocean, generating industrial noise in the ocean, emitting tons of air pollutants, including heat-trapping gases, and thousands of barrels of water pollutants.

The reason this is so worrying is that the Chukchi Sea is habitat for endangered bowhead whales, threatened polar bears, walrus and a host of other wildlife – many of which are vital to sustaining the thousands-year old subsistence way of life of Alaska Native coastal communities.

Shell’s drilling would take place directly in the endangered bowhead whale’s migration pathway through the Chukchi and Beaufort seas.

Lily Tuzroyluke, Executive Director of the Native Village of Point Hope said: “The ocean is our garden. We rely on it for subsistence foods that have sustained us and our culture for thousands of years. MMS approved Shell’s drilling in our ocean next summer without even responding to our concerns. Its approval recklessly endangers our way of life.”

Dan Ritzman, Sierra Club Alaska Program Director added: “It’s irresponsible for Shell to be pursuing dangerous offshore oil development when they know they can’t clean up oil spills in the Arctic’s broken sea ice. Instead of putting our children’s heritage at risk, we should be investing in the clean energy economy, which will create jobs, fight global warming, and leave our last wild places intact.”