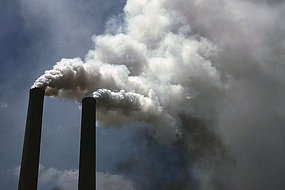 Talk about sending mixed messages to the Copenhagen talks. Yesterday, Steve blogged about how one Obama government agency – the Import -Export Bank had approved $3 billion for an Exxon gas project.

The move was a clear sop to the fossil fuel industry.

Hours later, the Obama Administration said it would regulate greenhouse gases, a step that would enable it to limit carbon emissions if Congress failed to enact climate legislation.  The move is a clear threat to the fossil fuel industry.

The administration declared that greenhouse gases produced by vehicles, power plants and factories were a danger to public health.

“The vast body of evidence not only remains unassailable, it’s grown stronger, and it points to one conclusion,” said EPA Administrator Lisa P. Jackson in announcing the decision. “Greenhouse gases from human activity are increasing at unprecedented rates, and are adversely affecting our environment and threatening our health.”

The EPA’s “endangerment finding” is intended to try and reassure delegates there that the US is committed to reducing emissions even if Republicans in the Senate scupper any domestic legislation.

His announcement was welcomed by climate scientists attending the Conference in Denmark. “It sends a powerful signal to Congress. It shows a degree of resolve on the part of the president,” said Rajendra Pachauri, chairman of the UN IPCC.

But predictably it had the Republicans howling with cries of foul play and that it would cost too much. “The elected Congress, not an administrative agency, should write the laws governing the economy’s response to climate change,” Senator Lamar Alexander (R-Tenn.) said.

Alexander, chairman of the Senate Republican Conference, added: “The costs of compliance with the EPA’s unilateral announcement today could run into hundreds of billions of dollars a year — costs borne by average Americans through huge increases in their electric bills and at the gas pump. This is an especially bad idea when unemployment is at 10%.”

Senator Lisa Murkowski of Alaska, the ranking Republican on the Senate Energy and Natural Resources Committee, and an oil-industry supporter said that the EPA’s endangerment finding was “a blunt instrument that will severely hamper our attempts to bolster the economy and get Americans back to work.”

But as the critics continued to attack it, the LA Times asked in an editorial: “Why has it taken so long?”