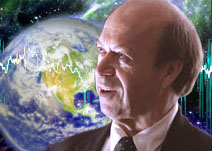 Quoting yet another climate sceptic the Express served up a disservice to journalism, by completely manipulating the climate debate.

Suddenly sceptics are appearing out of the wood-work left, right and centre, spurred on by “Climate Gate” and they are spouting rubbish.

So finally its good to hear from a respected and credible scientist.  And his message is stark too. In an interview with the Guardian newspaper, James Hansen, the world’s pre-eminent climate scientist, said any agreement likely to emerge from Copenhagen would be deeply flawed.

This is not because climate change is not happening but because any deal does not recognise the seriousness of the situation.

Hansen says it will be far better to start again from scratch.

“I would rather it not happen if people accept that as being the right track because it’s a disaster track,” said Hansen, who heads the Nasa Goddard Institute for Space Studies in New York.

“The whole approach is so fundamentally wrong that it is better to reassess the situation. If it is going to be the Kyoto-type thing then [people] will spend years trying to determine exactly what that means.”

Hansen is vehemently opposed to the market based solutions to climate change such as carbon trading – in which permits to pollute are bought and sold – which are seen as crucial by governments but critics maintain are fundamentally flawed as they don’t reduce pollution.

Hansen is also fiercely critical for leading politicians such as Barack Obama and Al Gore for compromising over climate change. “This is analagous to the issue of slavery faced by Abraham Lincoln or the issue of Nazism faced by Winston Churchill,” he said. “On those kind of issues you cannot compromise. You can’t say let’s reduce slavery, let’s find a compromise and reduce it 50% or reduce it 40%.”

He added: “We don’t have a leader who is able to grasp it and say what is really needed. Instead we are trying to continue business as usual.”

But Hansen insists there is still reason for optimism. “It may be that we have already committed to a future sea level rise of a metre or even more but that doesn’t mean that you give up.”

If you are worrried about false solutions to climate change, like carbon trading, then go and vote at the Angry Mermaid Award – where some of the nominees are promoting exactly these kind of issues.