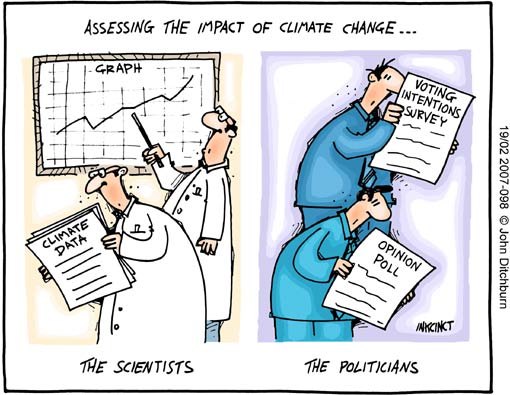 Well you didn’t really believe that a global climate deal was on the cards at Copenhagen did you?

Despite all the warnings that such is the urgency of the problem that a deal had to be made in Copenhagen, there will be no deal.

Not for a year anyway. And maybe never.

The latest news coming from the last meetings before Copenhagen, which are taking place in Barcelona, is that the key industrialised nations say they have abandoned hope of legally binding deal at Copenhagen summit, with a global treaty to fight climate change being postponed by at least six months and possibly a year or more.

One again the politicians have failed miserably and the corporate lobbyists have won, especially from the US. Speaking in Barcelona, Artur Runge-Metzger, the European commission’s chief negotiator, said: “It is a Catch-22 situation. People are waiting for each other so it is difficult to blame anyone. [But] the US position is significant. Clearly the US has been slowing things down.”

You can expect more on this blog in the coming days on the corporate lobbyists who have tried to wreck the deal on climate, but let’s start with a great article by the Center For Public Integrity on the corporate pressure to block the Copenhagen deal.

The Center argues that “Wherever nations have taken the first modest steps to stave off a looming environmental calamity for future generations, they’ve triggered a backlash from powers rooted in the economy of the past. Opponents of climate action may have different methods as they pressure different capitals, but the message is consistent: Be afraid that a cherished way of life may be lost. Be afraid that a better standard of living will never be had.”

The main findings of its investigations are:

Such is the concern about corporate lobbying  undermining climate action that a number of environmental NGOs have come together to work on the “Angry Mermaid” award that will be given at Copenhagen.

The public have been asked to nominate their top companies or organisations that have been wrecking or hijacking climate action either domestically or internationally. These nominations have been whittled down to eight, which the public can vote on. The eight nominations will be announced in just over a week’s time.

So watch this space.