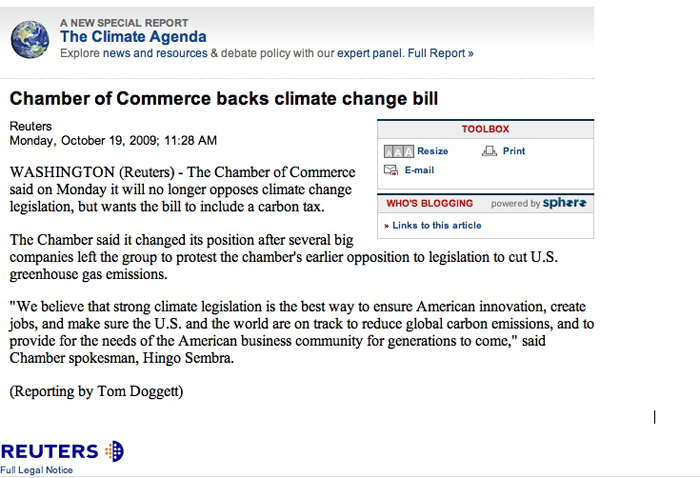 Their motto is “sometimes it takes a lie to expose the truth”. And yesterday that is what happened.

It was billed as a dramatic announcement: the US Chamber of Commerce, the old dinosaur business organisation that leads the business lobby in opposing climate change had suddenly reversed its position.

At a press conference at the prestigious National Press Club, the Chamber reversed its position on climate change policy, and promised to immediately cease lobbying against the Kerry-Boxer bill.

“We believe that climate legislation currently being considered by the U.S. Senate is a great start towards a bill that will spur American innovation, create jobs, and give us all a good chance of survival,” said the Chamber’s “spokesman” Hingo Sembra.

To the visible delight of reporters in the audience, he added, “We at the Chamber have tried to keep climate science from interfering with business. But without a stable climate, there will be no business.”

Sembra also said that subsidies for clean coal were misplaced. “Clean coal is a technology that is has not only not been proven, it basically does not exist.”

The news of the Chamber’s U-turn on climate was reported as fact by Reuters (see image) and picked in the New York Times and elsewhere. The Chamber’s “about-face” was also reported on Fox Business News and CNBC before the anchors were forced to retract literally in mid-sentence.

Because it was all a hoax perpetrated by the eco-pranksters, the Yes Men, designed to draw attention to the Chamber of Commerce’s “troglodytic” fight against climate change legislation.

The event, complete with fake handouts on chamber letterhead, at least a couple of fake reporters, and a podium adorned with the chamber logo, broke up when a spokesman from the real Chamber burst in.

What followed two men in business suits shouting at one another, each calling the other an impostor and demanding to see business cards, as if the business card is somehow the true proof of identity.

“This guy is a fake! He’s lying! This is a stunt that I’ve never seen before,” said Eric Wohlschlegel, an official at the actual Chamber of Commerce.

Watch the whole thing is on video here.

“This event is about the only sane thing for the US Chamber of Commerce to do. There is no way that a body with any public responsibility can have the stance that the Chamber has had until now. The statements  the Chamber has made on climate science are frankly embarrassing and unacceptable and time for change.”

“But who are you?” The reporter asks again.

“I represent the position the US Chamber of Commerce must take”…