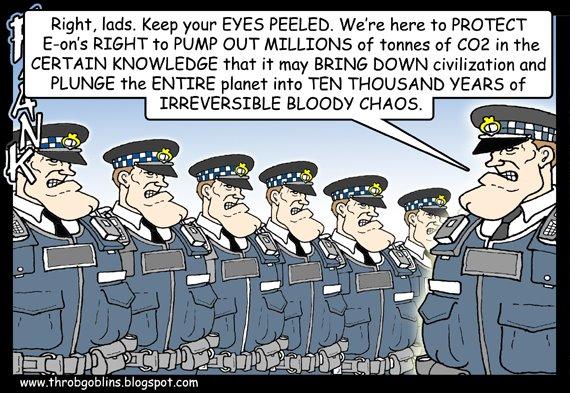 Tomorrow is the “Great Climate Swoop” where hundreds of climate activists will demonstrate against E.ON’s Ratcliffe-on-Soar in Nottingham.

It is a protest aimed at raising the issue of climate change in the run up to the Copenhagen Summit in December.

But the planned protest has caused  a strong backlash from the Police. Already there are increasing reports of activists being injuncted to stop them taking part.

Moreover at least one activist has been arrested on suspicion of conspiracy to commit criminal damage, a crime which can carry a maximum sentence of 10 years.

Richard Bernard from the Climate Camp – the group behind the swoop – argues: “They’re threatening and arresting people for just thinking and talking about taking meaningful action. It’s very obvious to all of us that the police are only interested in protecting companies like E.ON which are causing climate change.”

Over the last month, at least 27 activists have now been charged with conspiracy to commit aggravated trespass, dating back to a protest at the power plant in April, that was disrupted even before any protest took place.

Activists are now worried that Police are hardening their tactics against them. These episodes are in direct contrast to the “softy-softly” approach the police used at this Summer’s climate camp after they were widely condemned for using excessive violence at the G20 protests in London, when one innocent bystander was killed after being pushed to the ground by the Police.

According to the Climate Camp : “The decision to use a conspiracy charge against 27 climate change activists shows how, despite the police’s attempts to brush up their image at this year’s climate camp, they continue to use draconian powers to clamp down on the growing grassroots climate justice movement.”

There was also a sinister episode this Tuesday when a British climate change activist was stopped from travelling to Denmark to take part in climate change protests, by Police using anti-terror legislation.

Chris Kitchen, a 31-year-old office worker, said police officers boarded his coach. After checking all passengers’ passports they took him and another climate activist to be interviewed under schedule 7 of the Terrorism Act 2000, a clause which enables border officials to stop and search individuals to determine if they are connected to terrorism.

By the time the interview was finished, the coach had departed and Kitchen had to return to London.

“The use of anti-terrorist legislation like this is another example of political policing, of the government harassing and intimidating people practising their hard earned democratic rights,” he said. “We are going to Copenhagen to take part in Climate Justice Action because we want to protest against false solutions like carbon trading and to build a global movement for effective, socially just solutions.

“People who are practising civil disobedience on climate change in the face of ineffectual government action are certainly not terrorists, and I am sure that their actions will be vindicated by history.”

Kitchen has said he now fears that his treatment could mark the start of a clampdown on protesters.