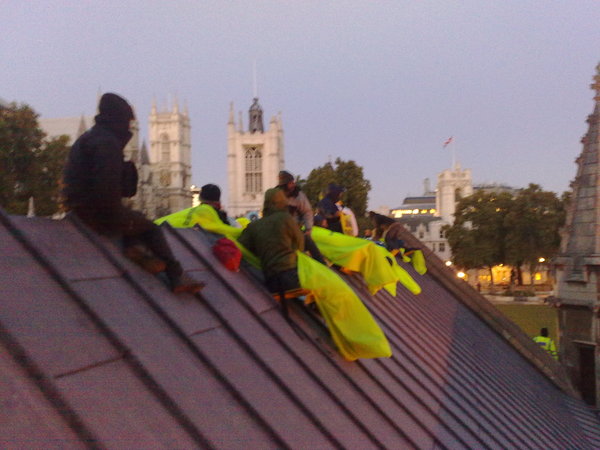 Headline on the BBC’s flagship radio show, the Today programme at 8.00 AM this morning: 20-odd Greenpeace protestors have spent the night on the House of Commons to highlight the government’s lack of action on climate change.

Next headline: a report by the Government’s own advisors on climate change says the government must do more to address climate change.

One warning from environmental protestors: one from the government’s advisors – but the same message. The UK government must do more.

According to Greenpeace, some thirty-one protestors have spent rather a chilly night on the roof of the House of Commons, with another 24 arrested (the picture above was at dawn). The demonstrators, who are aged from their early 20s to 712, have unveiled yellow banners saying: “Change the politics, save the climate. ”

The intend to ask MPs to sign a 12 point climate manifesto this morning, calling for zero carbon emissions by 2030.

One, 28-year-old Anna Jones, said the protest would remind MPs they “simply haven’t done enough to stop climate change and we need to see some action at home. We can’t stress enough how important this is. The clock is ticking – scientists are telling us we have just a few years left to act to save the planet.”

She continued “Now is the time to start putting policies in place to make sure we are on the right trajectory to peak our emissions and bring them down. But instead we have a government that is prepared to lock us into high carbon projects like the third runway at Heathrow.”

Although the Greenpeace protest is timed to coincide with the return of MPs to Parliament this morning,  their  message is boosted by the timely publication of a report by the Government’s own advisors on climate: The Committee on Climate Change, who have published its first annual progress report to parliament.

“It is crucial that government focuses its efforts on developing and implementing policies that will lead to deep emissions cuts in the next five years and beyond,” the CCC said. The CCC said CO2 reductions had averaged 0.6 percent a year from 2003 to 2007. This needs to increase to 2-3 percent a year to meet the government’s carbon budgets.

The CCC’s recommendations are:

Lord Stern, who led the 2006 government-sponsored review on climate change economics, said the committee’s report was “a fine piece of work, which should be supported across the political spectrum and will enhance the UK’s role in fostering global understanding and agreement”.

Meanwhile back on the roof, the sun is beginning to warm the protestors  – if you want to follow the Greenpeace activists who are twittering follow the link.