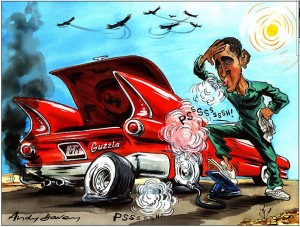 Years and years ago I sat in a meeting entitled “Talking with the Enemy” where a bunch of enviros sat down with leading corporate executives and talked about the topical issues of the day.

One of the participants was the man from Volvo who talked about the company’s prototype vehicle the LCP 2000, that could, in certain conditions do 100 mpg.

Convinced that no one wanted fuel efficient vehicles, the industry carried on making and selling cars that made them the most money: large gas guzzlers, based on repeated images of power, speed and sex.

In America, where the average size of a car is a truck, they took size to excess and the Hummer was born and the profits kept rolling in. On the horizon, the storm clouds of climate change, the growing ecological consciousness and the global credit crunch were brewing but the Big Three Auto makers ignored the signs, convinced of their own invincibility. The crunch hit and suddenly Detroit was feeling contrite, in real trouble and facing bankruptcy.

As the Big Three- Ford, Chrsyler and GM – tried to find ways to stay alive, with GM and Chrysler taking a $25bn bailout – Obama waltzed into the White House on a ticket of change and action. Sorting out the car makers was high on the agenda. Suddenly their negotiating position was severely weakened.

And yesterday was the perfect political fudge by Obama the deal-maker. In an historic agreement, Obama set strict limits on car exhaust emissions and directed producers to make a more fuel-efficient vehicle fleet.

The policy requires US auto makers to produce cars and trucks that achieve an average 35.5mpg by 2016 up from around 25 today.  But the significance should not be overstated, because cars and trucks are responsible for about a quarter of America’s greenhouse gas emissions, and it will reduce America’s carbon dioxide emissions by 30%.

What is utterly shocking is that this is the first time a national policy has been put in place, testament to how powerful the car lobby was in the corridors of power in Washington.  “For the first time in history we have set in motion a national policy aimed at increasing gas mileage and decreasing greenhouse gas pollution for all new trucks and cars sold in the United States,” Obama said in the White House rose garden.

Obama said America had paid a high price for its dependence on imported oil, and the change was long overdue. “What is all the more tragic is that we’ve known about these costs in one way or another since the gas shortages of the 1970s. And yet all too little has been done. Calls for action rise and fall with the price of a barrel of oil,” he said. Calls for action were squashed by the car lobby.

Obama said the change, which will improve today’s average 25mpg performance, was the equivalent of shutting down 194 coal plants or taking 58m cars off the roads for a year. It will cut greenhouse gas emissions by 900m metric tonnes, and save the equivalent of last year’s imports of oil from Saudi Arabia, Venezuela, Libya and Nigeria combined.

Let’s just look at as few facts, before we become too excited:

Indeed, the plan announced by Obama at the White House yesterday “gives the automobile manufacturers a lot of flexibility,” argues Robert Sawyer, professor of energy studies at the University of California, Berkeley. The U.S. automobile industry will be able to deal with it.”

So before we all get carried away, the average fuel efficiency in Europe is already 45 mpg. And if Volvo could make a car that could do 100 mpg fifteen years ago, what are the prototypes doing now?

Some cutting-edge vehicles do 120 mpg with prototypes doing 230 mpg. Thats nearly 200 mpg more than the US standard will be in 2016. And when a student team from in Quebec, Canada, scooped the grand prize in the 2009 “Shell Eco-Marathon Americas” this year, their vehicle achieved an incredible 2,757 mpg.

That makes 35 mpg look rather pedestrian rather than revolution, Mr. Obama, doesn’t it…