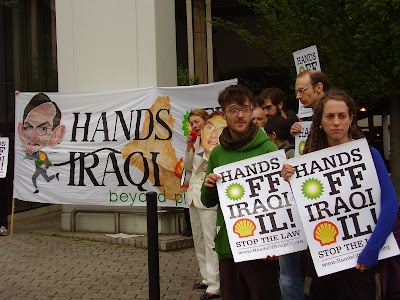 Only last Thursday, the boss of oil company Shell Jeroen van der Veer suggested that the oil giant was interested in joining forces with China on a number of oil projects in Iraq.

“We are in the process of forming partnerships for certain bids, and Chinese companies are a part of that,” he said.

But Shell’s attempts to get its hands on Iraq’s lucrative oil reserves have suffered a severe blow after a key parliamentary committee has pledged to “push Shell out” of the country.

The warning came from Jabir Khalifa Jabir, the secretary of the Iraqi parliament’s oil and gas committee. It is being seen by financial analysts as a “serious threat” to attempts by the multinational oil companies to get access to Iraq, which holds the second-largest oil reserves in the world.

Shell had been considered a frontrunner in the race to seize control of the Iraqi energy sector after signing a $4bn deal to process and market gas from the south of the country and ship it as liquefied natural gas (LNG) to Europe.

But the preliminary agreement, and a subsequent one with China National Petroleum Corporation, were deemed to be unconstitutional and detrimental to Iraq’s economic interests, said Jabir. “We are going to do everything we can to revoke this deal and to push Shell out,” Jabir said. “Both these deals are illegal because they didn’t go through parliament. The companies and their lawyers knew the old Iraqi oil law very well”.

Without reserves from Iraq, Shell’s reserves portfolio is increasingly reliant on unconventional oil – especially the dirty and carbon intensive tar sands from Canada….