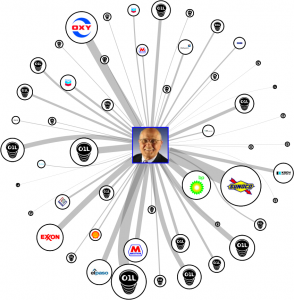 Next week there is another crucial American election.

OK – its not as important as the one ten days ago, but the outcome will have a huge bearing on Obama’s plans for energy, climate change, and how he tackles America’s ailing auto industry.

The battle is for the Chairmanship of the powerful Energy and Commerce Committee. In one corner stands the current chair – eighty two year old Michigan Representative John Dingell, the longest-serving House member, with over half a century in office.

In the other is Henry Waxman of California, a comparative youngster at sixty-nine. The fight is really important as the committee will take the lead on legislation in Congress to cap greenhouse gases and establish a multibillion-dollar market in carbon dioxide, amongst other things.

Steve Kretzmann, Exective Director of Oil Change International outlines why the Dingell – Waxman fight is so crucial. “There are many reasons to prefer Henry Waxman over John Dingell” he says, “Here are a few:

On top of this coming from Michigan, Dingell is one of the car industry’s staunchest allies; whereas Waxman’s record as Chairman of the Oversight and Government Reform Committee indicates he would be tough on the energy and auto industries. Waxman is also against expanding offshore drilling to the Atlantic and Pacific coasts.

The FT describes Dingell as “the automobile industry’s most crucial ally on Capitol Hill, leading opposition to higher fuel-economy standards and resisting limits on carbon emissions.”

It is not surprising that his friends in the auto and energy industries want Dingell to stay. Frederick Palmer, vice president of government relations for St. Louis-based Peabody Energy Corporation, the largest U.S. coal producer.  “Dingell is someone industry is very comfortable working with.”

The Detroit Free Press, Dingell’s home newspaper argues that  Dingell “is right where Michigan needs him. He’s right where the auto industry needs him and right where President-elect Barack Obama can best use him.”

President Obama does not need a close ally of the auto-industries preventing radical change. If Obama wants to push through half decent legislation on cars and energy he will need Waxman in place not Dingell.

But Waxman has an uphill fight on his hands. Almost all the House committee chairmen are backing Dingell because his removal “would erode a long-standing seniority system for such posts”, according to Bloomberg.

The 54-member House Democratic steering committee may vote on the chairmanship as soon as November 19th.

Before then, if you want to help Henry Waxman take down Dingell the Dinosaur please go here!