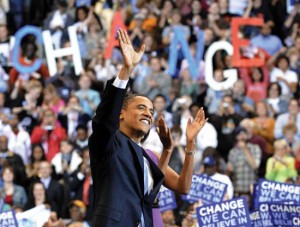 Millions of people the world over will be inspired by your victory last night. After the deep divisive years of the Bush Administration the thought of change coming to America is not a day too soon.  I know you are busy and won’t have time to read this, but I thought I would write anyway..

You, more than most, will not underestimate the sheer scale of the problems stacking up against you when you assume office in January. The Washington Post summed it up by saying “After a victory of historic significance, Barack Obama will inherit problems of historic proportions.”

You face the intransigence of two bitter wars, an on-going terrorist threat, an economy in meltdown, and a tarnished image abroad. You have inherited a super-power in terminal decline. You will be left with a Bush legacy for years to come, yet decisive decisions will have to be made quickly. Everyone will have an opinion, but at the end of the day its you who will make the hard choices.

Given the depth of these issues, Leon E. Panetta, the former White House chief of staff who has been advising your transition team, tells today’s New York Times that you have little choice but to “put your arm around chaos.”

So amongst the pressing issues in your in-tray, do not forget the coming climate chaos that could dwarf the problems of wars in the Middle East and the current financial crisis. Many people are asking whether you will be bold or methodical or both as a President, and whether you will match the great rhetoric of the campaign trail with true boldness in the White House. With climate you have to be bold. As you said in your acceptance speech: “the planet is in peril”. And in peril it surely is.

Another problem you have is the unbelievable weight of expectation that your campaign has generated. The greater the expectation of hope, the bigger the fall of reality. “You tend to campaign in black and white. You tend to govern in gray,” Richard N. Haass, the president of the Council on Foreign Relations, who has worked for four presidents, told today’s NYT.

So when it comes to climate, you have to be extraordinarily bold, there can be no grey ground of compromise. After president Bush, anything you do will be seen as progressive. You say you are committed to a European-style cap-and-trade system of mandatory limits on emissions for the world’s major polluters.

But that is misguided. As Antonia Juhasz, a contributing editor to Oil Change, and author of  The Tyranny of Oil: the World’s Most Powerful Industry — And What We Must Do To Stop It, argues today: “Rather than “cap and trade” pollution, ban it through regulation.”

A year from now when the world’s leaders assemble in Copenhagen to thrash out a post-Kyoto deal, the US for once has to show true, true, leadership, and lead the way in truly historic cuts in greenhouse gases.  You have already said some painful choices have to be made, and that is one.

But it does not have to be all bad news. You can kick-start a green renewable revolution, but to do that you have to avoid the booby-traps of nuclear power, “clean coal” and more offshore drilling. I don’t know who advises you on energy, but nuclear will not solve the climate crisis. Clean coal is an oxymoron. As for offshore drilling, I am sure you know it won’t work.

Back home, when it comes to ushering in a new dawn of politics in Washington where the expensive suits of the lobbyists from Exxon and Big Oil hold sway, you have to be bold too. When it comes to separating Oil and State and ridding politics of the corruption of contributions from big oil or coal, you cannot waver from your campaign rhetoric of campaigning for change.

You yourself took over $600,000 from the oil industry. What do they expect in return for this? Extra drilling off-shore, more acreage in the Beaufort Sea, relaxed rules on refineries. The list can go on. Your image will immediately be tarnished if, having taken those campaign contributions, you argue for increased offshore drilling, as you should know, you don’t give something and not expect something in return. So to change politics, you have to set it free from the money from Big Oil. The oil lobbyists have to be shown the door. And that does not mean just domestically.

It means the man from Shell can no longer argue for the invasion of a country to secure oil supplies. It means no more wars for oil, no more blood for oil. It means rethinking America’s involvement in the Middle East, Africa, and Central Asia. You have already re-written history. Now its time to deliver the future.