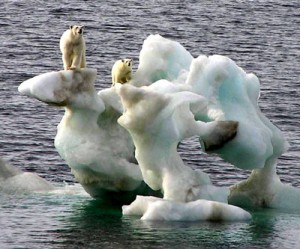 More bad news on the climate. A study by British researchers has found that the Arctic sea ice thickness “plummeted” last winter, thinning by as much as half a metre in some regions.

The team from University College London argue that the results provided the first definitive proof that the overall volume of Arctic ice was decreasing. “The ice thickness was fairly constant for the five winters before this, but it plummeted in the winter after the 2007 minimum,” lead author Katherine Giles told the BBC News.

The team has found that sea ice in the Arctic shrank to its smallest size on record in September 2007, when it extended across an area of just 4.13 million sq km, beating the previous record low of 5.32 million sq km, measured in 2005.

The recent record losses of ice cover in the Arctic has led to suggestions that the region could have reached a “tipping point” argues the paper’s co-author Seymour Laxon.

“About five years ago, the average projection for the sea ice disappearing was about 2080. But the ice minimums, and this evidence of melting, suggests that we should favour the models that suggest the sea ice will disappear by 2030-2040, but there is still a lot of uncertainty.”

Meanwhile if you logged onto You Tube yesterday you would have been able to watch a video of JFK arguing that “climate change threatens our very existence. Now is the time for an energy revolution.”

Of course, JFK never said it, but it’s the latest video from Greenpeace that has been launched to co-incide with their latest report “Energy [R]evolution: A Sustainable World Energy Outlook?”, produced by the European Renewable Energy Council provides a practical blueprint for rapidly cutting energy-related CO2.

In one of the most comprehensive plans mapping out future energy provision, the report argues that aggressive investment in renewable power generation and energy efficiency could create an annual USD 360 billion industry, providing half of the world’s electricity, slashing over USD 18 trillion in future fuel costs while protecting the climate.

“Unlike other energy scenarios that promote energy futures at the cost of the climate, our energy revolution scenario shows how to save money and maintain global economic development without fuelling catastrophic climate change. All we need to kick start this plan is bold energy policy from world leaders,” said Sven Teske, Greenpeace International’s Senior Energy Expert and co-author of the report.

I wonder what JFK would make of it all…