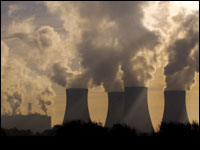 The UK should cut its greenhouse gas emissions by at least 80 per cent by mid-century, the British Government’s independent climate change committee recommends today.

The 80 per cent target includes aviation and shipping for the first time. Moreover because it is highly unlikely that aviation will be able to reduce emissions by anything like that amount, the UK’s power generation will have to be almost fossil fuel free to compensate.

“We have to almost totally decarbonise the power sector by 2030, well before 2050,” Lord Turner, the committee chairman argues. The committee said a more stringent target than the 60 per cent cut currently in the Climate Change Bill was needed, because new information suggested the dangers of climate change were greater than previously thought.

In a letter to Ed Miliband, the new Energy and Climate Change Secretary, Lord Turner said the tougher target would be “challenging but feasible”, and could be achieved at a cost of 1 per cent to 2 per cent of GDP in 2050.

Lord Turner said: “We have the potential to reduce our emissions by 80 per cent or more by using energy far more efficiently, by investing in developing new energy sources and by making relatively minor lifestyle changes. We based the target on what the science says but also double-checking that this is achievable and affordable, and we’re absolutely confident that it is.”

Ed Miliband, who was only appointed last Friday said he “welcomed” the report. “We need to act now to avoid dangerous climate change and the action we take must be guided by experts.”

Well, action one would be to stop the Kingsnorth coal-fired power station in Kent and action two would be to get Shell to pull out of tar sands in Canada. Do that by Christmas Ed and you would have made a great start…