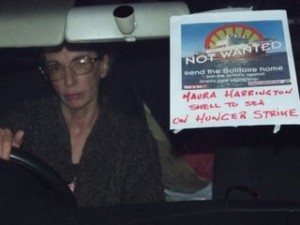 Ken was subsequently murdered by the Nigerian military for is courageous non-violent campaign against Shell.

Now someone else is putting their life on the line in their own battle against Shell, but this time in Ireland. A fifty four year old-teacher, Maura Harrington, has now gone on hunger strike to try and stop the laying of Shell’s controversial pipeline in Broadhaven Bay.

The pipeline is due to be built from Shell’s offshore Corrib gas field to an onshore refinery near Rossport in County Mayo. For eight years now the community has been fighting Shell to stop the pipeline coming on board. Harrington has had “enough of broken promises, outright lies and the constant bullying of the local population by Shell, their Blue & Limes ‘security guards’ and their accomplices in the Irish government.”

Harrington began her hunger strike last Wednesday, the day the world’s largest pipelaying ship, the Solitaire arrived in Broadhaven Bay, ready to start laying the pipeline. She has promised to stay on hunger strike either until the Solitaire leaves or she dies.

She says: “I place my Life or Death in the hands of the master of the Solitaire, Mr Simon van der Plicht. Be under no illusion that this is an idle threat. I will begin my Hunger Strike, as stated, if and when the Solitaire approaches Broadhaven Bay – it will end in one of two ways.

1. On written confirmation by Mr van der Plicht that the Solitaire is outside Irish territorial waters.

Maura’s courage to place her life on the line for ecological justice is truly incredible.

If you want to support Maura and the people of Rossport in their fight against Shell, please go here.