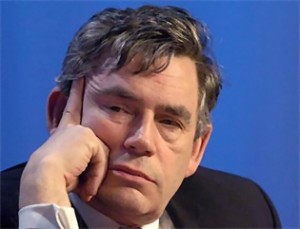 Britain’s embattled Prime Minister Gordon Brown faces a growing call from trade unions for his government to impose a $2 billion windfall tax on energy companies, who have made billions from the high oil price.

Whilst all the indications are that this will be ignored, Brown has come up with the novel idea of hosting an international oil summit this Autumn which he hopes will co-ordinate a political response to rising oil demand, whilst also proving to his domestic audience he is actually trying to reduce fuel prices.“The prime minister is determined to act domestically and to work with others internationally to address the functioning of international oil markets,” a spokesman for Brown told the Financial Times.

Already the guest list is proving to be “problematic”, with Mahmoud Ahmadinejad, the president of Iran, already black-balled. However other leaders who might not be approved of in Washington – Lybia’s Colonel Gaddafi, and Hugo Chávez, the president of Venezuela – have been invited.

If Brown is serious about reversing his political fortunes then a windfall tax would go down better with the 2 million or so voters who face fuel poverty this winter, compared to a posh summit at Downing Street.

For the summit, Colonel Gaddafi apparently wants to stay in a Bedouin tent somewhere in a London park. Maybe after a couple of miserable cold, damp December nights he will understand why fuel poverty for millions of people is a rising political issue, especially in relation to record oil profits.

Maybe then he could tell Brown, who is not listening to his electorate.