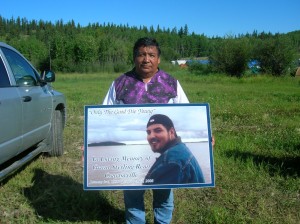 As Warren Buffett and Bill Gates’ trip to the oil sands continues to be be spun as positive news for the oil industry, here is Kenny Bruno’s second blog from Alberta that highlights the real story:

“North of the tar sands empire, in a vast delta of lakes, seasonal ponds, winding rivers, marshes and small forests, is Fort Chipewyan, one of the oldest European settlements in Alberta, and the headquarters for several First Nations. These indigenous groups are facing the catastrophe of tar sands head on, as the gargantuan projects headquartered 150 miles south, in Fort MacMurray, pollute their water and reduce their fishing, trapping and hunting.

Steve Courtoreille, a Cree councillor, tells a typical story from his youth: “I went out to the bush with an Elder called Snowbird Martin for two weeks with just a small backpack and a canoe. We’d camp near water and just dip our cups in the water and drink it. Now I wouldn’t dare. Now I have to carry gallons of water. It’s sad. It’s pitiful.”

Courtoreille is especially upset about the death of his nephew Grant Sterling Remi Courtoreille, who died last January of lymphoma at the age of 28. As with many of the cancer cases in Fort Chip, local people suspect exposure to toxic contamination from the tar sands.

Coutoreille has survived outrages before. At age 5 he was torn from his family and put in one of the notorious Residential Schools, where he was beaten, sexually assaulted, and forbidden to speak Cree. After being expelled for making home brew, he returned to a semi-nomadic life with his family and relearned Cree language, trapping skills and traditional ceremonies as a young man. At 52, he is passing those along to the youth of Fort Chip, who are paired with Elders in community gatherings and ceremonies.

Courtoreille is a fascinating figure in Fort Chip’s multi-generational, multi-cultural approach to the tar sands catastrophe. By his own account a former big drinker and rowdy guy, he led the traditional opening fire ceremony at the Keepers of the Water Conference. Later on, he enjoyed watching a nephew rapping on stage in an oversize Boston Celtics jersey. In nightly scenes that Charles Ives couldn’t even dream of, couples danced the two-step to an authentic sounding country band while traditional drummers psyched up contestants in a dramatic Dene hand game played for high stakes.

Courtoreille takes the aural chaos in stride. But not the death of his nephew Grant, for which he blames the tar sands.

“We allowed it [tar sands development] to slip away from us and out of control. We allowed trinkets and $5 bills to buy us.”

Spurred by cancers and double-mouthed fish, the Fort Chip community is mobilizing for a moratorium on tar sands. They are planning to sue if nothing else works. “I’m hoping we can reclaim our lands,” says Courtoreille.”