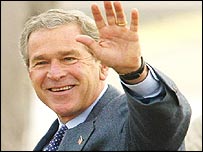 And so begins George’s long walk into the history books. He has months left in his Presidency. He has finished his farewell tour of Europe and finished his final G8 meeting.

In his final few months, he may be responsible for yet another foreign policy disaster if the US attacks Iran, but when the dust settles his refusal to accept climate change as a serious issue will be up there with Iraq as part of his fundamentally flawed legacy.

Bush has failed to show any meaningful leadership on climate change, instead he has prevaricated and preached falsehoods taken from his buddies in the oil industry. He gave a millimeter or two at the Summit, by saying that he would “seriously consider” a 50 per cent cut in carbon emissions by 2050. But it was a millimeter when it should have been a mile.

True to the last, he signed off the G8 with a defiant farewell over his refusal to accept targets by telling his fellow leaders: “Goodbye from the world’s biggest polluter.”

Although it was meant to be a private joke, the Independent put it more bluntly as a “two-fingered salute from the President from Texas who is wedded to the oil industry.”

David G. Victor, an expert on climate policy at Stanford University, tells today’s New York Times. “Nearly every government is looking beyond Bush, and while they are hopeful that the next president will surely be more constructive on this issue, they don’t know what the president can really bring to the table. It is hard for the U.S. president to negotiate with strength when his ability to offer commitments hinges on national legislation that he does not control.”

So maybe the best thing that the next US President can bring to the table is the fact that they are not George W. Bush. And that would at least be a start.