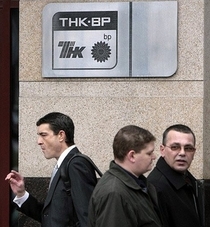 This fight is getting nasty, and when it is all over, the future of one of Britain’s biggest companies could have been decided. The dispute between BP and its Russian partners took a turn for the worse over the weekend when it was announced that the oil giant was suing the Alfa-Access-Renova (AAR) consortium for $370m.

The move is seen the latest in the bitter power struggle between BP and the AAR consortium over its Russian subsidiary TNK-BP. For BP the stakes could not be higher: Its 50 per cent stake in TNK-BP accounts for a quarter of the company’s total output and a fifth of proved reserves. AAR holds the other 50 per cent.

But if it is not careful BP could lose control of the company. Stan Polovets, chief executive of the AAR consortium, said it considered BP’s claim to be “unjustified and grossly inflated” and accused BP of using “bullying tactics.”

BP lodged a claim in the High Court last alleging that BP is owed $370m under an agreement struck at the creation of the TNK-BP joint venture in 2003. However, Mr Polovets said: “AAR considers the claim as another example of BP’s bullying tactics and an attempt by BP to deflect the focus away from its mismanagement of TNK-BP. BP’s lack of willingness to treat us as equal partners and constructively deal with the differences between the shareholders is one of the main reasons behind the current tensions.”

The spat shows no sign of abating. Last week, BP was in conflict over work permits for 49 foreign executives, including TNK-BP Chief Executive Robert Dudley. British Prime Minister Gordon Brown will discuss the escalating conflict with Russian counterpart Dmitry Medvedev at the G8 summit in Japan. Meanwhile the Russians are seeking the dismissal of Robert Dudley today at an extraordinary meeting in Moscow.

Mikhail Fridman, one of the Russian billionaires behind the AAR consortium told the FT that: “We are agreed with BP on one point – that this is a dispute for control of TNK-BP.”

It’s going to be really interesting to see who wins.