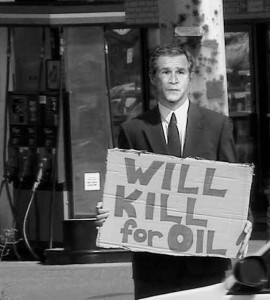 For a man whose ties to the oil industry are legendary, it came as a surprise that Bush once said that America had to break its oil addiction. Like an ailing addict who has tried but failed to beat his cravings, Bush has gone cold turkey for oil. As the world faces record oil prices, he wants more of the stuff.

Today, he will call on Congress to end a federal ban on offshore oil drilling. Bush’s announcement follows a similar one by pseudo-green McCain (he thinks he is, but he ain’t) who rocked up in the oil grave-yard town of Houston to also argue for offshore drilling. Suddenly it’s the in vogue call of the Republicans and Florida’s Governor Charlie Crist, has also called for an end to the ban.

It may line the greasy pockets of a few oilmen for a few years, but it will not prevent the inevitable clean energy revolution that is coming, despite the deeds of the oil man and his cronies in the White House.