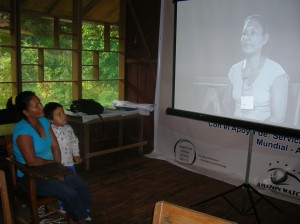 As Lima prepares to receive over 60 heads of state for the EU/LAC Summit to discuss poverty, sustainable development, climate change and energy, a grand drama of indigenous people versus oil is playing out in Peru’s vast Amazon region, 70% of which is now concessioned to oil companies.

Here at the Escuela Senen Soi in the jungle town of Yarinacocha, it’s all about the oil. Named for the charismatic Shipibo leader Kruger Pacaya, who died tragically before the School opened, Escuela Senen Soi is a leadership training on human rights and extractive industries.

The purpose of the 30 leaders gathered here is to understand the forces they’re up against and design campaign strategies, as they defend their territories against what they see as incursions by the oil, mining and logging companies.

Some of the leaders at this training barely have bus fare, and depend on the School’s budget for soap, toilet paper, and drinking water. Yet they are determined to take on some of the most powerful forces in the world: the oil industry, multilateral development banks and their own national governments.

Incredibly, they are starting to win some battles. With the help of Lima and US groups, they are suing Occidental for contamination in the Northern Amazon; they have brought a small, Texas-based oil company to the bargaining table; and, in some areas, they have kept oil companies at bay entirely. Other areas have been saved by luck: Repsol, for example, is packing up after finding no oil in their giant concession in Atalaya.

Still, high oil process mean great rewards for those who find oil, even in remote jungles where indigenous people have lived for millenia. There is no end to this struggle on the horizon; the riches involved are too great. The best hope in the long run is for the international community, recognizing that it is a sort of mass suicide to burn all the oil that can be found, will set aside some oil to stay in the ground indefinitely. The Amazon, playing a double role as carbon sink – above and below ground – would be at the top of the list of oil areas NOT to exploit.

The Peruvian government doesn’t see it that way, and they have a point. Why should they be the ones to sacrifice the riches oil can bring? A system of compensation for oil left in the ground will be tricky to design, and is perhaps a distant goal.