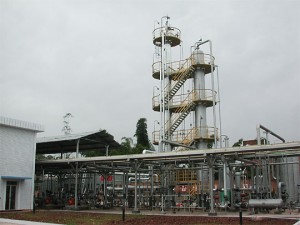 More protests in China, but this time not about the Olympics or Tibet, but a petrochemical plant. Residents took to the streets of a provincial capital over the weekend to protest against the multibillion-dollar plant which is backed by China’s leading state-run oil company.

The protest, against a $5.5 billion ethylene plant under construction by PetroChina in Chengdu, the capital of Sichuan Province, reflected a surge in environmental awareness by urban, middle-class Chinese determined to protect their health and the value of their property.

The protesters walked calmly through downtown Chengdu for several hours to criticize the building of a combined ethylene plant and oil refinery in Pengzhou, 18 miles northwest of the city center. Some protesters wore white masks over their mouths to evoke the dangers of pollution. About 400 to 500 protesters took part in the march.

Organizers circumvented a national law that requires protesters to apply for a permit by saying they were only out for a “stroll.”