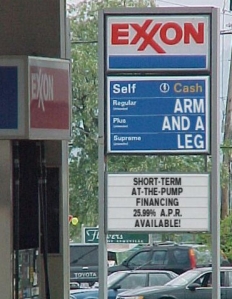 OK, so the McCain/Clinton gas tax holiday idea would probably get some stiff competition, but its in the running, for sure.

It will encourage more driving, thus driving up demand, thus meaning higher prices. It will simultaneously discourage investments in alternatives, which are our only hope to end our oil addiction and get out of this mess. D’oh!

And now apparently Senate Democratic leadership is going to propose it next week. The word is they’re going to pay for it with a windfall profits tax on Big Oil – which is good, but shouldn’t we really be using that money for alternative energy?

In the words of NYC Mayor Mike Bloomberg:

“You want to hold oil prices down? In the short term, strengthen the dollar. Part of the reason oil prices are soaring is because the dollar is tanking.”

Over the longer term, though, China and India’s insatiable demand for oil will continue to drive oil prices up, and turmoil in the Middle East is likely to keep them up. So there’s really only one way for us to go: alternative sources of energy — wind, solar, biomass, water and, if we can make it safe enough, nuclear.”

Exactly (except maybe for that nuclear bit…).