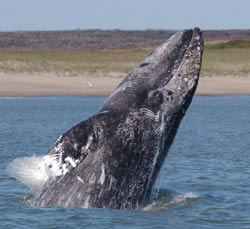 Britain agreed to bankroll controversial drilling for oil and gas off Russia’s Sakhalin island, despite a warning from its own officials of the “potentially devastating effects” on a critically endangered species of whale.

The decision to flout their own experts’ advice is revealed in deeply embarrassing documents the British Government fought for three years to keep secret. They reveal that drilling could cause the extinction of one of the world’s most vulnerable populations of the marine mammals, the grey whale.

Nevertheless, the Government’s powerful export credits and guarantees department (ECGD), which provides support to the exports industry, agreed to help back the $20bn (£10bn) project by Sakhalin Energy Investment Company, in which Shell has a major share.

This flew in the face of warnings from both the British Foreign Office and the Department for Environment, Food and Rural Affairs (Defra). One documents from Defra flagged “substantial concerns about this project”. It said it had “significant worries about the possible impacts” on the endangered species, and that “any losses are likely to be significant to its future”, adding it was “also concerned about the longer-term impacts on this population of disturbances caused by mining and explosions, or of oil spills”.

You can see the civil servants making up their mind: “What’s the extinction of one species of whale, if we secure British jobs and investment?”