Last week, on the 5th anniversary of the Iraq War, hundreds of people stood with Oil Change International in the streets in 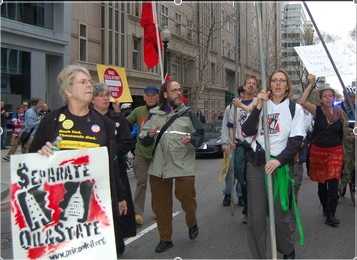 front of the American Petroleum Institute demanding a Separation of Oil & State. They know, just as we do, that oil was the central motivation of the war in Iraq, that oil money in politics is helping to keep us there, and that oil money is working hard to prevent a transition to a clean energy future.

Now, for the first time ever, we can see exactly how members of Congress who accept more oil money also vote in favor of Big Oil. Follow the Oil Money is an exciting new tool that tracks which companies are pumping their dirty oil money into politics, who is receiving it, and how it correlates to key climate, energy and war votes. This helps you find out just how oily your members of Congress are and how they have voted on the issues that mean the most to you.

A few weeks ago, the House passed a bill that would fund clean energy and end some oil subsidies. Did you know that those who voted against this bill received on average more than 5 times more oil money than those who supported it? The effort is now stalled in the Senate, so please make sure to take action and tell your Senator to support clean energy, not oil.

Overall, we found that members of Congress who voted for Big Oil took almost four times more oil money than those who voted in the public interest. This is not coincidence– the oil industry knows the leverage of their dollars. This is why we have to fight back by exposing the undue influence of the oil industry and demanding a Separation of Oil & State.

Follow the Oil Money isn’t just a cool new tool. It’s proof that there is a striking connection between oil dollars and bad votes. We hope that you will use it to contact your members of Congress and organize in your community. Tell your friends about it and if you like what you see, please consider supporting us at Oil Change International.