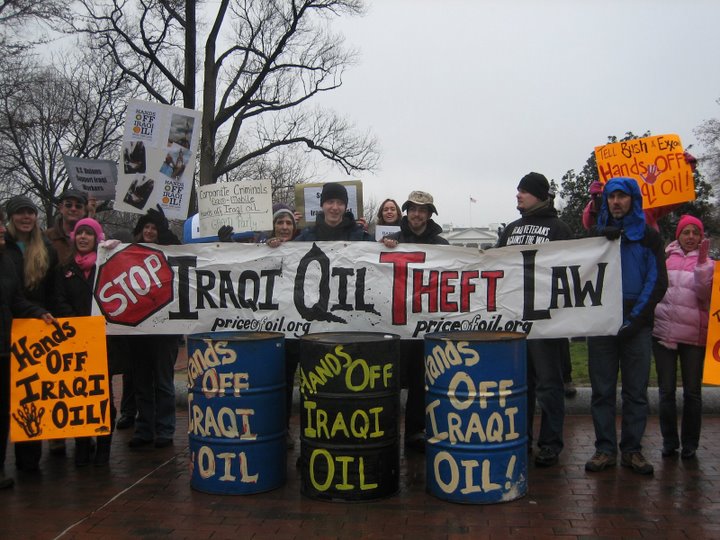 On February 23, dozens of solidarity actions were held across the US and UK to support the Iraqi people in their resistance of an oil law that would give unprecedented control to foreign oil companies. In Washington, Oil Change International —in coalition with other US labor and peace organizations— hosted a press conference and march to expose the true intent of this law.

Trina Zahller of Oil Change International stated that, “No Oil Law or long-term contracts passed under the occupation will have legitimacy. They are seen as products of coercion, exploitation and physical violence against the Iraqi people.”

In the face of widespread opposition to the Iraqi Oil Law, the Iraqi Parliament continues to face considerable pressure to pass the law that would grant highly favorable 30-year contracts to foreign oil companies. By setting the terms of that access now, when Iraq is vulnerable and under a military occupation of 160,000 foreign troops led by the most oil-hungry nation in the world, these companies will be getting contracts that they previously could only dream of.

Gene Bruskin, the co-covener of US Labor Against the War, presented an “Open Letter” to Prime Minister Maliki and President Bush signed by four hundred trade union leaders, members and labor allies in support of the demands of Iraqi unions.

Adam Kokesh of Iraq Veterans Against the War added that the military and economic occupations are “inherently tied”, and that Iraq will never attain role of law while under martial law.

The Iraqi Oil Workers Union has been a highly visible and vocal opponent to the oil law since the beginning. They have rallied in the streets, created physical blockades to prevent foreign oil companies from trespassing onto their fields, and they have continued to organize despite threats on their jobs, their lives, and the lives of their family.

“They have done all of this,” said Zahller, “for the sake of telling the Bush administration and companies like Exxon: Turn around and get your hands off our oil.”