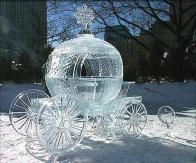 A famous ice festival in China, that attracts tens of thousands of tourists, appears to be the latest victim of rising global temperatures.

The festival, in Harbin in the far northeast of China, has become the city’s biggest individual source of income since it was launched in 1985.

But that income is under threat because the ice sculptures are starting to melt much earlier than usual.

Harbin is one of China’s coldest cities. In winter, temperatures can drop as low as -35C. However last year, Harbin’s average temperature was 6.6C, the highest on record.

Higher local temperatures mean that even in January the midday sun starts to melt many of the sculptures. And the warmer weather is reducing the length of the tourist season.

Sun Lei, an official involved in the festival, told the BBC that the festival traditionally runs until the end of February. But he added: “We’re worried it won’t last that long this year.”

Give it a few years and it won’t be happening at all….