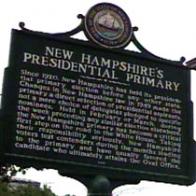 Interesting post by Cathy Duvall, the Sierra Club Political Director on Huffington Post about the importance of climate change in the New Hampshire primaries.

Cathy writes: “The media may not be paying close attention, but in New Hampshire it’s easy for the candidates to talk directly to the public about the issues they believe are most important to voters. Here, it’s clear that the presidential hopefuls know that citizens want to hear about plans for clean energy and solutions to global warming.”

“What is truly amazing is the intensity with which the candidates discuss the issues. At Saturday’s debate, Barack Obama stressed the need for a cap on carbon emissions along with a 100-percent auction for the credits.

“In other words,” he said, “every little bit of pollution that is sent up into the atmosphere, that polluter is getting charged for it. Not only does that ensure that they don’t game the system, but you’re also generating billions of dollars that can be invested in solar and wind and biodiesel.” Some of my colleagues saw Obama in Lebanon, early this morning where he called for change and inspired his audience by talking about the need to “roll back climate change and break the tyranny of oil.”

At a rally just an hour ago, I saw John McCain kick off his rally with a pledge to fight global warming. This morning’s New York Times reported that it’s “an issue he said voters in this state placed on his agenda”. According to Cathy, New Hampshire has “solidly put global warming on all of the candidates’ agendas”.

After eight years of Bush, the times are definitely a changing…