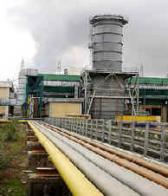 Further trouble for Iraq’s beleaguered oil industry. An explosion today at a fuel storage tank caused a huge blaze at the country’s largest refinery some 180 km north of Baghdad, injuring at least 36 workers. The fire is said to be spreading.

“This is the biggest fire I have ever seen at Baiji refinery. We have not had a fire like this before,” said an engineer told the Reuters news agency. He said the explosion had started in a liquefied petroleum gas (LPG) unit.

The refineries at Baiji in north-central Iraq have capacity of 310,000 barrels a day, according to the U.S. Energy Information Administration, and have been operating at less than full capacity due to power cuts and other problems including fires.