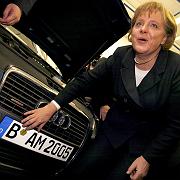 The European car industry has pledged to fight the already watered-down plans to reduce CO2 from new cars. Leading the fight will be the Germans and their powerful car industry, which is dominated by gas-guzzling cars like BMW, Porsches and Mercedes-Benz.

Even the country’s Chancellor Angela Merkel has opposed the plans saying they were “not economically favourable.”

Under the EU proposals, carmakers that fail to meet carbon dioxide emission limits by 2012 will face fines. Penalties will start in 2012 at 20 euros per gramme of CO2 over a target level, and will grow to 95 euros in 2015.

But the car companies are not happy. Volkswagen “branded the proposal unfair, saying it would hit German firms harder than European rivals”. BMW “said the plan would distort the market and must be changed” and also called them “naïve”. Even the French manufacturers who have the most to gain with the Italians have spoken against the plans. Peugeot has said “These plans are anti-ecological, anti-social, anti-economical and anti-competitive in relation to non-European Union carmakers.”

However most people believe the car industry has gotten off lightly. Jos Dings, director of the respected Transport and Environment said: “If today’s proposal becomes law, it will boost the SUV arms race in Europe, rewarding carmakers for their climate-killing strategy of making ever heavier cars. In the long term this strategy will backfire meaning heavier cars, more CO2 emissions and more accident deaths.”