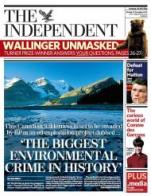 Last week we blogged about the irony of BP’s signing a new oil sands development at the same time as Bali Climate conference. Now the Independent is having a great go too at the oil giant.The issue takes the lead in today’s paper.

The Inde says: “BP, the British oil giant that pledged to move “Beyond Petroleum” by finding cleaner ways to produce fossil fuels, is being accused of abandoning its “green sheen” by investing nearly £1.5bn to extract oil from the Canadian wilderness using methods which environmentalists say are part of the “biggest global warming crime” in history.”

BP’s boss, Tony Hayward says that its investment was the start of a long-term presence in Alberta. He said: “BP’s move into oil sands is an opportunity to build a strategic, material position and the huge potential of Sunrise is the ideal entry point for BP into Canadian oil sands.”

Responding to criticism, a spokesman for BP added: “These are resources that would have been developed anyway.” That lame excuse is like a murderer saying if I hadn’t shot him, someone else would have.