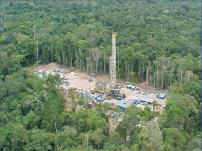 Ecuador is the latest oil-producing country to try and renegotiate the terms and conditions over contracts, this time trying to impose a windfall tax on Chinese companies in the country.

However the Chinese state oil firms are seeking international arbitration to try to overturn the move, arguing it threatens millions of dollars of investment in the Andean country.

Ecuador signed contracts with China’s Sinochem Corp and a venture owned jointly by China National Petroleum Corp (CNPC) and Sinopec before oil prices began their heady rise to the present level of nearly $100 per barrel.

But an official close to CNPC’s operations in Ecuador said the royalty would force Chinese projects in the country “out of business” and lead Beijing to review its investments in oil producing nations with “limited resources but rising risks”.

“CNPC is preparing to put the case to the Hague,” the official said, referring to the Permanent Court of Arbitration based in the Netherlands city. “The company can’t possibly survive if Ecuador starts to collect the windfall royalty.”