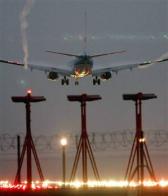 The British Government will present plans to build a third runway at Heathrow which will effectively double the number of flights from the airport.

The Transport Secretary, Ruth Kelly will publish proposals today for building a new runway dedicated to short-haul flights by 2020. In the interim, she intends to allow up to 60,000 more flights a year on the existing two runways.

The Department for Transport also plans to abolish the practice of giving residents under the flight paths respite from the worst noise for half of the day.

At present, one runway is used for take-offs and another for landings, with their roles switching at about 3pm. Under the new arrangement, planes will land and take off from both runways for several hours each day from 2010.

Today’s consultation document will also claim that Heathrow can be expanded without breaching the European Union’s limit on air pollution and the Government’s limit on noise.

Kelly also argued that abandoning expansion plans might salve green consciences but it would have no impact on climate change, because the global appetite for air travel would continue to grow at 5% a year. “If Heathrow is allowed to become uncompetitive, the flights and routes it operates will simply move elsewhere. All it will do is shift capacity over the Channel. It will make us feel pure, but with no benefit to the rest of the planet.”

So that’s it Ruth. We just carry on building airports, because if we don’t someone else will. That is a completely nonsensical argument that will be disastrous to the local community as well as the global climate.