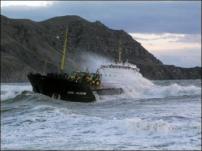 As hundreds of Russian soldiers have been deployed to clean up a 2,000-tonne oil spill in the weather has deteriorated, in the worse storms to hit the region in thirty years.

Officials are now warning of “an environmental catastrophe” as high winds and heavy rain continued to lash Russia’s southern coastline. Thousands of tonnes of spilled fuel oil has coated birds in a thick black sludge along a vast stretch of coastline. Some 30,000 sea birds have now been estimated to have been killed.

“There will be 500 soldiers taking part in the clean-up. We have asked the Defence Ministry for more people,” Rinat Gizatulin, a spokesman for the Natural Resources Ministry, told wire reports yesterday in Port Kavkaz. “We will use booms to try and contain the oil spill,” Gizatulin said.

The trouble is booms don’t work in high winds and rough seas, Rinat. You should know that.